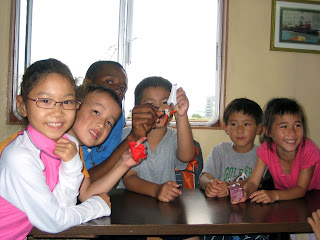 Hello, my name is Alice and I work with the All- Access Boston Harbor Program. Yesterday, we were able to take kids from all around Boston to Spectacle Island for the day. Arriving in a fashionable manner via the water taxi was the Nazarro Center. It was great that they were able to arrive by the taxi. Not only was it efficient, but it was also exciting for the kids! After they unloaded at the Bank of America Pavilion, they were greeted by a large lobster in a touch tank! As other groups arrived, the murals began to get colored in and the lobster tank was beginning to draw a crowd. Even the older kids (14-16 year olds) were coloring in the murals. Soon it became a Save the Harbor/Save the Bay masterpiece. The temperature began to rise as we boarded the boat to Spectacle Island. When we got there, we ate lunch and then hiked to the top of the hill, explaining the history of the island as we winded up the drumlin. At the top, there was a nice breeze for the kites and a cooler full of ice cold water for drinking! 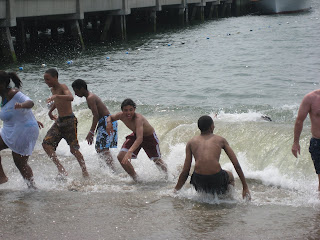 After flying kites and playing field games, we trekked back down to the bottom and cooled off by jumping in the water. The temperature topped 89 degrease that day, but the water was the best place to be. On the ride home, the kids from Idiil Learning Center taught us how to do origami and one of the kids made me something very special! I received my very first white origami swan. It doesn't get much better than that!

Until next time,
Alice Binns 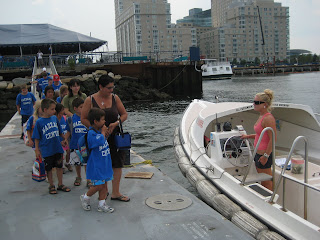