Fun in the Sun at South Boston

This is Marissa and I am coming from the office to tell you how awesome last week was at South Boston even though it was raining on Friday. Well anyways, last week I worked with BJ, Jason, and Darius. We started by going fishing and crab hunting along the beach. Then we took the kids down to the dock. The do 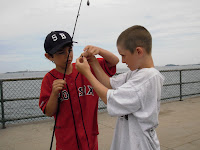 ck was not all that of a success for the good reason that all the rods kept on getting caught in the fence. But instead of the fishing being the success, the crabbing was. We ended up catching about maybe five crabs using the crab traps over the dock.
Later that week we went back to the bridge and tried crabbing and fishing again. Still we caught no fish but instead we went down to the shore and went crab hunting. We were very successful with that by the way. We had to have caught at least 50 crabs along the shore. It was so much fun. I think the kids really enjoyed it as well. Well that is what we did last week and I'll be back soon to fill you in on some more fun at South Boston.