The Origin of the Sea Star 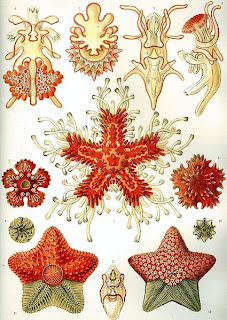 Ahoy! This morn' I was discussing with me matey Bill the ways of the sea star. Despite being more commonly known as "starfish", this star-shaped creature is far from a fish. The sea star is a member of the Phylum Echinodermata - and are not fish - they are invertebrates, meaning they have no backbone (and a few other characteristics that we won't get into here).

At Piers Park we had three sea stars that captivated the minds of even the most stubborn of our youth. One child mistakenly ripped off an appendage but to her surprise she learned that the appendage will eventually grow back - as sea stars have the ability to regenerate limbs!  As this miracle of the sea enamored the luminous eyes of our youth, my friend BJ took it upon himself, and all the other folks around him to educate the masses on what a sea star is, which is The sea star is truly an infatuating being, it dwells on the ocean floor, and although many think they are motionless, they actually can be fairly active. To eat a clam or a muscle, many sea stars turn their stomach inside-out, digesting the food outside of the body, then pulling the stomach back in.

If you would like to learn more about this wondrous creature of the deep, the sea star, or any of its close relatives, I would implore you to view the "marine life" section in your local library.