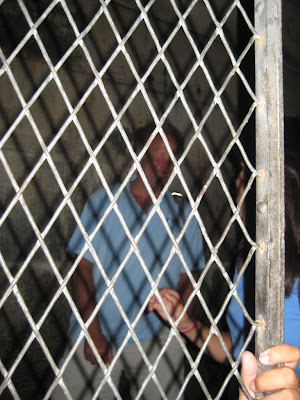 Hey everyone, this is Thi :)
I just came back from the AABH trip to George's Island today and as usual, had the time of my life!
For the first time, I went to the tunnel with the light coming from gun slits and led a group of thirty kids from the Salvation Army. Many tried to hold my hand but I replied by shaking my head and saying that I had to stay behind to make sure everyone was there. As they all filed down in pairs to the room to the left of the tunnel, I pulled Jerry aside, who was a counselor of that group, and asked him to hide in the "coffin." He energetically jumped in and closed the lid as I ran up behind the kids to talk about the room and what it was used for. Returning back to the only entrance out, I stopped in the room with the coffin, stood on top of it, and told the story of the dead prisoners who were buried on the island. "This is one of the many coffins here on George's Island, but the rangers left this here to show visitors how everything was like back then. Do you guys want to see what it's like in there?" The kids surrounded me and waited for me to open the lid, expecting just an empty, dusty coffin.

A multisecond later, the screams pierced through my eardrums as I barely heard the thundering footsteps of a group of very frightened little children. Jerry and I laughed until we were holding our stomachs, tears rolling off our cheeks when the campers timidly walked back to the room. After seeing Jerry, they started jumping on him and giving him a hard time, but he took it good-naturedly, smiling.
We crawled back through the entry way, only to be blocked by kids sitting on the steps, claiming the Lady in Black was in the tunnel.

I had such a great time, and can't wait for the Treasures of Spectacle Island next week!
Thi
at 3:37 PM