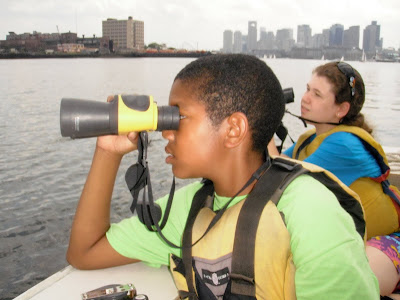 After the lunch-hour madness (20+ kids power-walking—“we’re not running!” they assure me—up and down the dock, pulling up lobster traps, testing water quality, measuring and counting crabs, showing each other how to cast fishing lines, asking a million questions a minute!) at Courageous Sailing Center in Charlestown, we’re ready for a slightly calmer (though no less exciting) afternoon. And we’re all in for a treat, because afternoons at Courageous quickly became one of the best parts of my summer (and I a real highlight everyone on the boat). After lunch, the kids split up into teams, known as “steps”: step 2 for beginners, step 3 for more experienced sailors (these kids can sail without a counselor!); step 4 for competitive sailing and racing. Our partnership with the courageous has resulted in an in-depth environmental education component “step” integrated into the step 3 program: “step GREEN,” where we take a small group of campers aboard the “green boat”(no, it’s not literally green;)to explore the ecology of the harbor they spend their days sailing in.

This week, we searched for Arctic Terns – and watched them swooping down to capture herring from the water, then tracked them back to their nesting grounds. The kids were enchanted, eyes-glued to binoculars as we circled the nesting grounds. Once they became eye-witnesses, they were ravenous for information! Here’s a sampling of just a few of the questions we talked about:

How far do they migrate? From the Arctic! Massachusetts is the southern-most end of their range.

Are they really endangered? What does that even mean? This question lead to a pretty sophisticated conservation discussion – we talked about how organisms are designated (as either endangered or threatened) under the Endangered Species Act, and the different kinds of protection that can provide. We compared federal and state-level protection (which is what the Arctic Terns have—they’re listed as a Massachusetts “species of concern”), and talked about local populations—what it means for Arctic terns to be “endangered” in Massachusetts but still plentiful in the arctic.

What will happen to the terns if the ice caps melt? While we’ve made tremendous strides to protect this species nesting grounds, habitat loss in their winter home is raising higher alarm bells—scientists are concerned that temperature changes associated with global warming may be the next big threat confronting this recovering species.

You can find more information here.