For the two weeks I worked there, Piers Park Sailing Center in East Boston was beset by a plague—hordes of microscopic plants and animals swarmed so thickly through the water column that they noticeably reduced the water’s clarity. Emily told me that the previous week’s Secchi depth reading, a measure of water clarity, had been 3.5 to 4 meters; during the weeks I was at Piers Park, Secchi depth never exceeded 3.5 meters, and most often hovered around 3.0 meters. Half a meter might not seem like such a drastic reduction in visibility, but many algae blooms occur in the few meters below the water’s surface. The drop in Secchi depth that we observed could indicate increased concentrations of algae in the Harbor. While happy to have been able to observe such a far-reaching process in the Boston Harbor, neither our HarborExplorers nor I were happy about our hypothetical algae bloom. 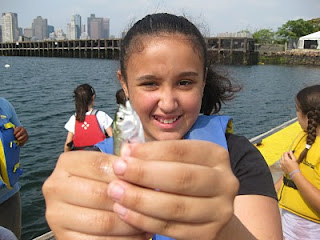 Algae blooms, however, do more than just make it more difficult to see into the Harbor’s depths. Depending on the species of algae, algae blooms impart water with a slimy green or sickly, reddish-brown tinge. Blooms are unattractive and gross, even to an untrained observer. Some species of dinoflagellate algae produce toxic compounds, poisoning fish and making shellfish unsafe to eat. Fortunately, we have no evidence to suggest that the algae we observed were toxic enough to kill fish; they did, however, make the water unappealing enough to keep the fish from venturing close to our dock. Fishing in algae-infested water is pretty frustrating! Even using sea worms as bait, we only caught tiny butterfish.


Algal blooms occur when large amounts of nutrients enter the Boston Harbor, usually following a large storm. Nitrogen and phosphorous, two essential nutrients that allow algae to proliferate, wash into the harbor when rainwater dissolves fertilizers and other compounds. During extreme storms, some nutrient-containing waste enters the harbor through leaky sewer lines and combined sewage overflow pipes. Nutrient pollution in the harbor isn’t nearly as severe a problem as it was before the harbor was cleaned up, but there are still measures we can take to ensure that nutrient contamination in the harbor is kept to a minimum. Lawn fertilizers, for instance, contain exactly the mix of elements that algae need to bloom—keeping their use to a minimum, or stopping their use altogether, reduces the risk that they’ll end up polluting our harbor. 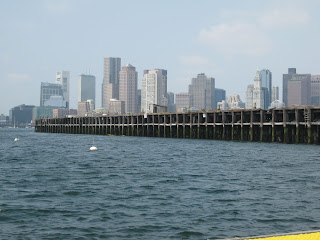 The Boston Harbor is a delicate system that human activity can easily disturb. Without human intervention, nitrogen and phosphorous move through living things in a complex and interconnected cycle. Even unintentional actions that humans undertake on land can have far-reaching consequences for marine ecosystems, and algal blooms are just one of the unpleasant side effects of our careless mistakes. I can only hope that in every year to come Boston Harbor Explorers experience a harbor that’s even cleaner than it was the year before.