Identifying a new fish can be a tricky thing, and the job is made tougher by the fact that many fish have more than one common name.
Yesterday our four young anglers caught their first choggie, also known as a bergall, cunner or connor. (Absolutely no relation to Conor Newman whatsoever!)
Here is a picture of the fish they caught. 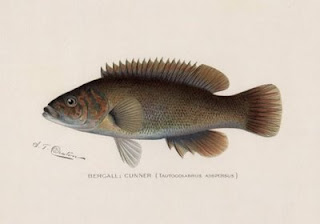 Here is what Wikipedia has to say about the species.
Tautogolabrus adspersus, is a saltwater fish found in the western Atlantic. It is edible and its musky taste is considered a delicacy by some. Specimens may grow to 12 inches though most range from 4-10. Often bergalls are found mixed in with black fish (Tautog), living on or near the same structures. Much of the food eaten by those bergalls living among Black fish are the leftovers from the Black's prey. Cunners can be distinguished from the Tautog by their pointed snout. Cunners are generally smaller, so are usually thrown back by anglers who think they've caught a "short" Tautog. Cunners are pesky bait stealers, and anglers who target them use the smallest hooks possible. They are used as bait when fishing offshore, or filet for use inshore or as chum. They prefer to live near structures, such as sunken boulders. In past years, they have been important commercial fish, but now are considered pests. Cunners can be confused with Black Seabass and otherGrouper, as well as Tautogs for their ability to change color.
The choggie is easy to distinguish from the pogie, which is the common name here in Boston for an oily fish called the menhaden, also known as the bunker.
Here is what Wikipedia says about pogies:
The Atlantic menhaden (Brevoortia tyrannus) is a small, oily fleshed fish that plays a major role in the marine ecosystem on the east coast of the United States. They go by many different names, some of the most popular being bunker, pogies, mossbacks, bugmouths, and fat-backs. The maximum size for the Atlantic menhaden is usually about 15 inches in length. The average size of menhaden is smaller in the southern portion of their range, and largest at the northern portion. They are bright silver in color, and have a number of black spots extending horizontally from the gill plate to the tail, with the largest spot found directly behind the gill plate. They are quite flat and soft fleshed, with a deeply forked tail. The edges of the menhaden’s fins and tail often have a yellowish hue. At sea, schools of Atlantic menhaden may contain millions of members. They make great live bait or chunk bait for game fish like striped bass, bluefish and even bluefin tuna!
Here is a picture of a pogie: 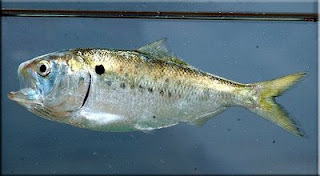 Hope this helps to clarify things: Now go catch some more choggies!
Bruce Berman
at 7:35 AM