Save the Harbor Inundates Spectacle Island 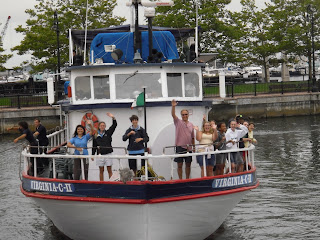 The campers pile onto the green at Piers Park. I round them up and attempt to keep them all in the same general vicinity. The excitement is brewing and anticipation building up in not only the kids awaiting a beautiful day at Spectacle Island, but myself as well seeing as I have never been to a Harbor Island before. As the boat arrives all doubt of cancellation is lost and our trip of learning and exploring begins. We all get on the boat and the snack buying commences with “Cheetos” and “Hershey’s” (notice quotations as to not pull a Jason and infringe upon someone’s copy rights). I was not sure how to respond to being called dad by one of the campers and I decided not to delve into it's deep meanings, but to remain indifferent about the situation by continuing as though Alice was not still laughing at me. 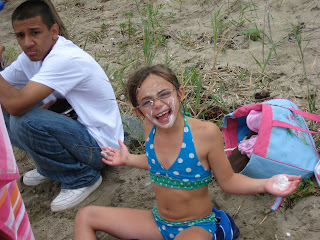 Once we laid foot upon the island we had lunch with some familiar faces. Jay’s group from Quincy and Laura’s group from the Courageous Sailing Center had all boated to the island showing off their beautiful new sea legs. Save the Harbor Save the Bay had officially taken over Spectacle Island. After lunch we took a nice hike up the hill to do some kite flying at the top and explore some small, off the beaten trail paths. The sun finally decided to cooperate and burst through the clouds just as we got back down for some swimming in the ocean. We found cool rocks and nice pieces of sea glass that of course were not taken since we learned on the boat ride that they are resources of the island and must not be removed. Time had flown by and it was then time to board the ship and head back to Piers Park. 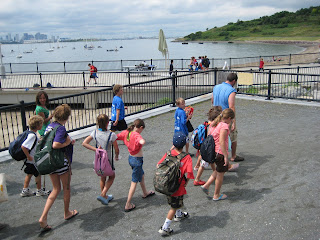 The boat ride back was a serene one knowing that for some of us, we had just taken our first step ever onto an island and for me onto one of the Harbor Islands. We enjoyed the breeze and warm weather as the boat pulled back into the Piers Park dock. I watched the kids walk to their cars explaining everything they had learned and done on the island to their parents. A successful trip had come to a close, but an excitement about new opportunities to revisit the islands and learn more about the Boston area restored.

“A large volume of adventures may be grasped within this little span of life, by him who interests his heart in everything.” – Laurence Sterne