Yesterday, July 14, was a fateful day in the lives
of four young men and our BayWatcher Bruce Berman... 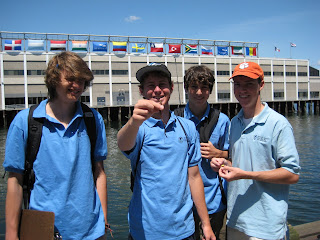 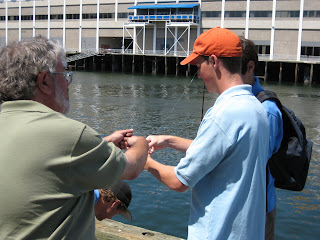 After getting word that we were less than fantastic fisherman, Bruce led four young, zealous and amenable fishermen (including Tom Regan, Conor Newman, Alex Klein and myself) through a "Fishing 100" course, in which we learned the tricks of the trade in the ways of the fishing rod. The list of topics is endless, but some of the highlights were: tying two lines together from separate rods, how to put bait onto a hook, what to do when our rod is stuck, and also, most importantly, how to catch fish with an injured rod. 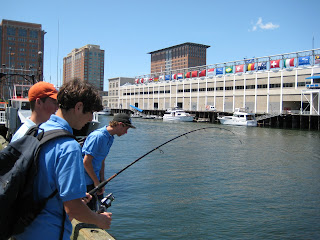 We went out to fish on the pier (with our crippled rod) unsuccessfully, catching only a tunicate. This underwater creature boasted a fluorescent orange color, and was smaller than a full fist.
Despite not being the intimidatingly large striped bass we had hoped for, it was a great catch for day one, and I will soon update you all on the copious amounts of large and majestic fish we will catch in the near future.
Sincerely,
Rob Benner, Master Angler in Training.
at 4:23 PM