A Tunnel Through Time 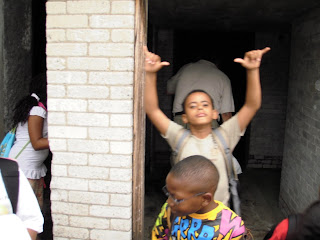 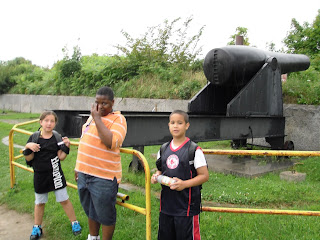 Today we managed to catch some good weather in the morning, and went to George's Island.  After hearing the story of the "Lady in Black," everyone was anxious to get in the dark tunnel.  Right after lunch we walked down to the fort and right into the tunnel.  A few of us were a bit timid at first, but in the end we almost all went through the tunnel and back.  A few brave souls even claimed to see the Lady herself.  After that all of the tunnel adventurers decided to come up with Bruce and me on top of the fort.  We explored all of the watchtowers and marveled at the only cannon left up on top of the fort.  Unfortunately, while we were up on the roof, the rain began to fall and we were forced to hide out in one of the watchtowers for a couple minutes.  However, while in the tower, we all had a great view of the city and the other harbor islands.
On the way back from the island the poor weather continued but it was not at all bad.  As a result of the bad weather, the boat began to rock and everyone on the top deck, along with myself, had a lot of fun rocking back and forth on the harbor before we got back to the Bank of America Pavillion.
See you on the harbor,
Alex Klein
at 3:14 PM