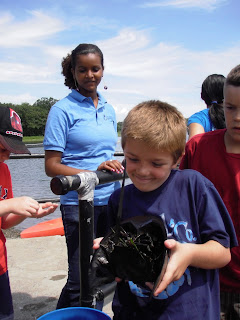 Michael AKA "Mr. Narwhal" admiring his new friend, one of the world’s oldest creatures, the Atlantic horseshoe crab, Limilus polyphemus. These animals have remained relatively unchanged on earth for over 300 million years. Animals such as these are often referred to as living fossils, unlike Bruce - who is just old.
Jason
at 9:38 PM