The Strange and Wondrous Carcinus Maenas

Afternoon readers, Today was this young crabbers first day over with the energetic youth in Dorchester, and a helluva day to catch some crabs, Green Crabs specifically. Within the span of about 30 minutes the kids down at Dorchester caught an approximated 13-15 of these invasive beings, known as one the 100 most invasive species on our planet. Many of the kids were astounded by this abundance of green, asking many question to which I did not know the answer, so here's some information for all of you who are in the same boat as me:

First off, this is your average Green Crab: 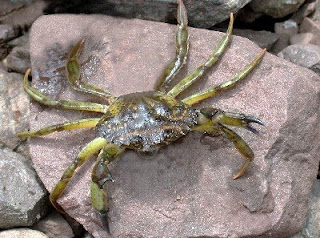 The official name for the Green Crab is Carcinus maenas. It is referred to by different names all over the world. Indigenous to the British Isles, the Green Crab has successfully been prolific throughout the North American West and East coastlines, part of the Southeastern South American Coastline, and parts of both the southern African and Australian coastline as well. Along with these areas the crab has invaded, it is predicted to soon invade and dominate on many other shorelines across the globe. The Carcinus maenas has been known not only to be green, but brown, gray and red also, with the red crabs being known as the most aggressive. The species' invasiveness has become a problem in many areas, and great efforts are being put into action to cease the Carcinus maenas problem. One example of this, according to Wikipedia: In 1995, Edgartown, Mass put a bounty on the Carcinus maenas, resulting in 10 tons of collected crab. If you want to learn more about the Carcinus maenas I recommend you check out your local library.

Actually, I think it is an invasive asian shore crab.