Good Afternoon. Today, on this gloomy Tuesday four Master Anglers in Training(Conor Newman, Tom Regan, BJ Clark, Alex Klein, and myself, Rob Benner) underwent our second fishing endeavor spearheaded by our own Bruce Berman. It began as a dreary, wet, and useless day until after about 45 patient minutes BJ reeled in a crab, quickly followed by Conor capturing an incredible Choggie (we initially thought it to be a Pogie). This fish was about six inches long, with incredible fins that felt like plastic, big, curious, black eyes and covered with rough, iridescent scales. Not only was this catch exciting for us, but also for a young boy and his mother, who were passing by on their way to the Children's Museum, and were witness to the whole event. The Choggie would have been a great being to ostentatiously pass around, but we decided instead to let our young friend (and hopeful fishing prodigy) throw the fascinating creature back into the blue depths. Although this Choggie was a great catch, we will be catching bigger and rarer underwater life-forms soon enough. 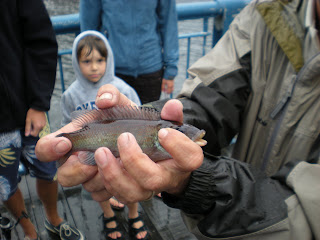 Above: The magnificent Choggie itself

Actually, a choggie - a kind of wrasse. A pogie is a local term for menhaden: Different fish.