A Clean Harbor is a Happy Harbor 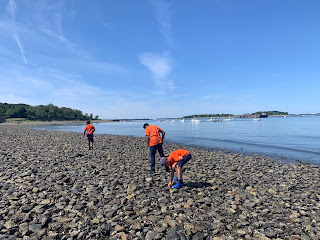 Good Morning Harbor Explorers, this week at Camp Harbor view was a special one. As we walk onboard the Provincetown II we hear a special announcement from the captain that we would be arriving to Long Island about an hour later than usual due to the King Tide. The King Tide was the lowest the tide has been this summer which made it difficult to dock, so we got to spend a little extra time going around the harbor. Upon arrival, we were planning to take advantage of this opportunity to go tide pooling. The water was pulled so far back it revealed the life that hides behind those waves. I convince my team of campers into a friendly competition to see who would be able to catch the most Asian Short crabs. The first one to jump with joy was a young 12-year-old named Anthony. He called himself the crab whisperer. He was very confident and took the lead in finding as many crabs as he could. Each one he found he shouted with enthusiasm, and would then race back to the bucket to place them in. I'm pretty sure he won the competition for being fearless and resourceful. Not only did he find lots of crabs but also noticed small pools of water along the rocks that held life in it. If you looked inside you could see a school of minnows swimming back and forth, as well as hermit crabs, crawling between the rocks and hiding in the nooks and crannies. It was hard to fish with 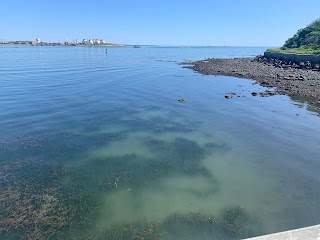 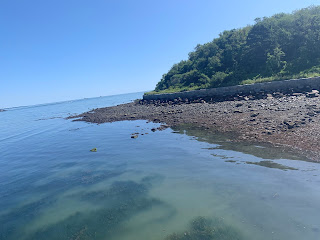 the king tide but it was a lovely view to see how much kelp was actually hidden when it was high tide.
The amount of life in the harbor is important to note because it indicates the quality of the water. Water quality is not only important to the life in the harbor but to the city and people who use this resource year-round, or just for the summer and swimming season. Water quality testing is done by DCR and surrounding cities to verify it is safe to be in or near the water. Sampling and testing are done various times to check bacteria levels, especially after the rain. Save the Harbor Save the Bay is a big help when it comes to testing water quality. Our water quality report card was released by the end of May and displayed a consistent average of the quality of the water in the harbor from within the last 6 years.
With that being said, over by long island we are happy about the water quality of the harbor for it brings us all types of marine life that we can share. For example, a young camper at fishing club caught a baby flounder from the pier on the island. It was just below 12in. but it was big enough to cause a lot of commotion as he reeled it in. The campers were in awe.
If they thought that was impressive, they would
be blown away by the big and wonderful striped bass my fellow O'Bryant girls caught at our fishing derby! The size of those stripers was jaw-dropping 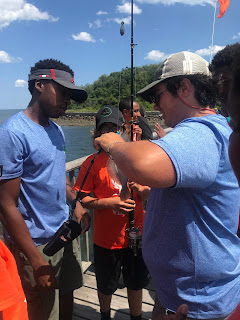 because it was nothing like the baby-sized ones we catch on the pier at Camp Harbor View. I was both proud and impressed by these girls holding up these heavy fish. They were so big, at least half my size.


Stay tuned to see what we catch this week at CHV,
Best of Luck
Kharliyah
at 9:49 PM