Hello! Thanks for taking the time to read my blog.

This week was a very interesting one! All of the camps at Quincy Recreation ended this week, including our Harbor Explorers Program at Blacks Creek. Monday and Tuesday were our last “regular” camp days with the kids we’ve been working with all summer, so we tried to make it a special one. We brought out all of the various water exploration tools we’ve used throughout the summer: minnow nets, a touch tank, a crab trap, a seine net, a refractometer, and a soil corer. We also brought several fishing rods to allow our kids to try fishing. Unlike most of the Save The Harbor sites, we do not often fish at Blacks Creek. This is for several reasons. Firstly, we need to overcast at this site which can be difficult and potentially dangerous with the age of our campers as well as the many boats that are in the surrounding waters. We also don’t tend to fish because there is much more to catch in the shallows with a net than in the center of the creek with our rods. In fact, all of Monday and Tuesday we caught nothing on the rods but plenty with our nets and crab trap. We had fewer campers than usual this week, likely they were at other camps or on vacation, and because of that, we were able to make Monday and Tuesday very driven by each camper's interests. When they arrived we asked them what games they wanted to play and during the water time we allowed them to choose which activity they each did. Most of the campers were very excited to try the fishing rods and to spend time with our touch tank. 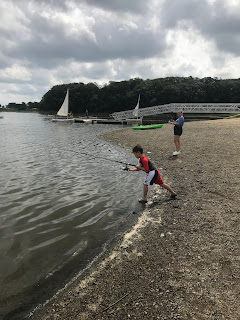 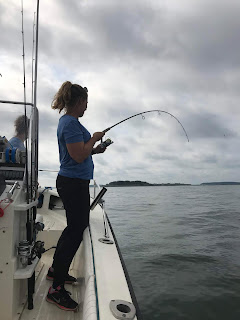 Wednesday of this week was our annual staff fishing derby. We arrived at Fan Pier early in the morning, were divided into teams according to numbers that could fit on each boat, and took off. I was with Kaya and Brianna on Basil Freddura’s boat, Basil is one of the owners of The Daily Catch and Calimari Fisheries. Basil was an awesome captain and was very patient with teaching us all he could and allowing us to use his personal gear. We cruised around, testing out a few of Basil’s favorite fishing spots, before finding a great area. We ended up finding a boil (where several big fish are chasing little fish and causing movement on the surface) with many birds flying around it. Just as Brianna cast her line we saw some big spots on our fish finder. Almost immediately after, the line shot out on her rod, and she had hooked a big one! Basil helped coach Brianna through landing a big fish and helped teach us all along the way. They eventually got the fish on the boat, and it was a 34.5-inch Striped Bass. Everyone celebrated, so excited that we caught such a big fish, and quite early in the day! The rest of the day was less eventful, we caught some Pogy (Menhaden) and several smaller stripers. I loved learning techniques for catching different fish and overall had a blast. Our whole boat was very excited and proud that we caught one big striper! We didn’t win, as two other boats had headed far out and found a ton of large striper, but we were very excited to get on the board. I also got to take one of the fillets home and had a delicious seafood dinner the next day! 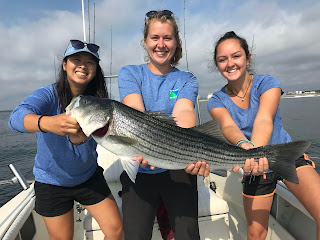 Thursday we returned to Blacks Creek for their end of the summer celebration, called Nautical Day. The families of any camper at our Harbor Explorers camp or the boating and sailing camps were invited to attend. My staff and I set up several stations for families to enjoy, such as fish printing, touch tank learning, minnow net exploring, and beach trash clean-up.  The fish printing was a big hit, as it almost always is. Fish printing is a very cool activity that Save the Harbor does at many of our public events. We have a frozen (real) fish that kids cover in paint. After you have a thin layer of paint covering the fish you put a sheet of rice paper on top of the whole fish. When you slowly peel the paper back you are left with a painting that shows all of the scales, fins, and major body parts of the fish. My favorite fish to print with is a flounder, they are so interesting looking and kids are always fascinated by their unique shape and their eyes. Overall, Nautical Day was a lot of fun and a great way to end the portion of my summer spent at Blacks Creek.


On Friday I ventured out with the Camp Harbor View team to learn about their site, where I will be for the rest of the summer.

This was an awesome week, filled with special activities and tons of fishing. I am sad to say goodbye to the wonderful staff and campers I have had at Blacks Creek, but excited to get to work at a new site and learn more about fishing there.