It feels good to be back on the harbor this week! Being on vacation is great, but you really do miss the smell of salt in the air after some time. This week was fun to be back for, a new session at CHV started, and we had the annual Save the Harbor Save the Bay fishing derby! Shout out to Grace! She represented Camp Harbor View really well by winning the derby with a 45.5” striped bass! Congrats to all the fisherwomen who caught keepers in the derby, some really impressive fish were brought in.
Even though I didn’t catch any fish during the derby it’s always nice to be out on the water. Luckily, I was fortunate enough to take home a striper fillet. Thank you to the angler who caught the fish I ate! It was delicious.
I used a recipe for garlic and herb baked striper fillets from the cookbook Cooking the Catch, by Dave “Pops” Masch. I turned the oven on to 415, and while waiting for it to preheat I chopped some Italian parsley and minced several cloves of garlic. The recipe called for specific amounts of these ingredients, but since I had a different amount of fish, I just eyeballed what I needed.
Once the oven was preheated, I put the fillet in a glass baking dish with some olive oil, flipping the fish to coat it. While doing this I sprinkled the fillet with some kosher salt, freshly ground pepper, the parsley, and the garlic.
I put the dish in the center rack of the oven and fifteen to 20 minutes later the fish was done! I served it with green bean salad straight from my garden and rice. I used the leftover fish for fish cakes, striper hash, and as an addition to salad.

I think the success of the derby is evident of how water quality has improved greatly in the harbor and in other coastal places in the United States. When my dad was younger, striped bass were not nearly as populous. He recalls very few stripers being caught then and the majority of the fish he brought in were bluefish.
The Chesapeake Bay provides striped bass with ample spawning grounds. However, in the 70’s and 80’s subpar water quality due to low dissolved oxygen levels, increased acidity, increased chemical levels, runoff, and poor sewage treatment coupled with overfishing led to huge drops in striped bass population. The water quality during those times did not help the stripers that did survive since they would move from one polluted area to another.
Striped bass populations recovered when places such as the Chesapeake and Boston cracked down on what was released into the ecosystem. Improved fishing regulation also helped the striper population rebound.
Boston Harbor is now one of the cleanest urban harbors in the United States and provides ample recreational opportunities. Despite this, there are some current challenges to maintain the superb water quality we’ve worked so hard to get. Even though Deer Island Wastewater Treatment facility is state of the art, it is not equipped to treat for pharmaceuticals and micro-plastics that enter the system. New legislation is necessary to control the release of these into our wastewater and new water treatment processes need to be implemented in order to intercept these pollutants. 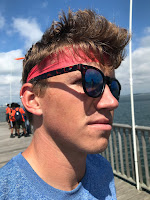 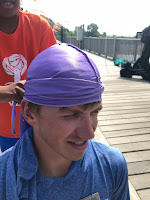 Lastly, I’d like to say thank you and goodbye to Xavier, the Senior Harbor Educator at CHV for the summer. It was awesome working with you, and we had a lot of fun! Good luck in Vermont, we’ll miss you! Please enjoy some cool pictures of our fearless leader. 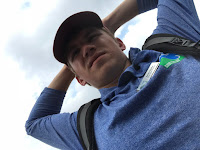