Hello! Welcome to another blog describing my weekly adventures in the Boston Harbor! This week was completely different from the rest of my summer because I am now working at a new site, Camp Harbor View. The Senior Harbor Educator that was at this site had to leave for the summer, so I got to jump in! The timing was perfect because the site I was at, Blacks Creek, ended last week.

My first week at CHV was great! The Save the Harbor team that works there is awesome and were all patient and eager in teaching me about their site. Camp Harbor View is an awesome summer camp for middle school students that live in Boston. The camp is free of cost to all participants and provides three meals a day, busing to the boat, boat rides to and from the island, camp apparel, and generally four weeks of fun. It is such a pleasure working with an organization that is providing incredible activities to so many, regardless of financial situation. At CHV, Save the Harbor teaches the campers to fish. Each day we have 4 or 5 groups of campers that come out to the pier to fish with us and to learn about the organisms we catch.

The most delightful part of working at CHV is the awesome campers. My favorite age group to work with is middle school, and these kids are extra awesome. Middle schoolers can be so fun to work with because they are often still willing to get carried away with fun and silliness but you can also begin to have adult-like conversations with them. The Camp Harbor View campers are generally great at polite sarcasm and that makes them all the more fun to teach. It's clear there is a strong sense of support and acceptance at CHV, because even when they first met me campers were generally very comfortable being their true selves. It’s been lovely to be a part of a community where kids are able to have fun and be themselves! 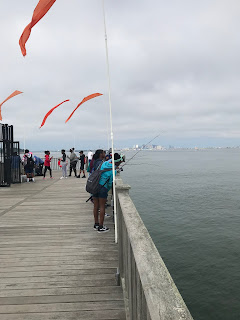 This week our most exciting catches were two legal size flounders that we found in our crab traps! The campers were fascinated by the flounders but also freaked out by the way they moved and splashed. I was also excited to see how many Rock and Jonah crabs are at Camp Harbor View. These are the two native crab species, and in many places that I have worked around New England they are not nearly as prevalent as the invasive species, Asian shore crabs and green Crabs. Asian shore and green crabs were accidentally brought over to the United States aboard boats from Asia and Europe, respectively. It is believed that one of the main methods of movement of invasive marine species was in the barrels commonly used for shipping. Scientists have postulated that when arriving in the New World crew members would rinse out the barrels in the ocean, accidentally releasing any taggers-on that had entered the empty barrels in their home ports. Both Asian shore and green crabs have few natural predators in US waters and reproduce at very high rates. This means that there are many of them and they compete with the native crab species for food and other resources. In recent years many biologists have reported finding more invasive crab species and less native species when exploring along the shore. Efforts are being taken to more precisely monitor all four species as well as to decrease the abundance of invasive species. The fact that we catch so many native crab species at Camp Harbor View made me excited and hopeful for the status of their populations. On Friday we had some extra exciting catches, a skate and two spider crabs that were carrying eggs! It is great fun to be at a new site where we catch new things and I get to teach about different fishing strategies.

All in all, I had an awesome week working at the new site. I am excited to be there next week, but also starting to feel the end-of-summer-sadness. I only have one week left at this job before I move to my fall job. This summer has flown by! Spending every day out exploring the water has been so fun and I am definitely feeling the age-old adage that “time flies when you’re having fun!”