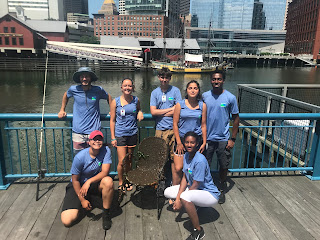 Well we start off on the Fort Point Channel. We kayak around looking for trash floating in the harbor. Not to brag but I was 100% the fastest one out there. While being the fastest kayaker in existence I also picked up some trash along the way. A used cup, a ball, and a plastic wrapper. I didn't pick up mu
ch but I also pointed out some area's that were riddled with trash. When we returned to the dock, I ended up shocked seeing that we had multiple bags full of trash. I knew there was garbage floating around in the harbor but I didn't expect there to be so much. Someone even found a needle. All this trash reminded me of what it was like back in the 50's and 60's where the harbor was so dirty and filled with trash that you could walk across it. Which when I say walk across it, I don't mean a bridge. I mean across the water. Anything you could think of was dumped into that harbor. I wouldn't be surprised if somehow an entire house is in that harbor. 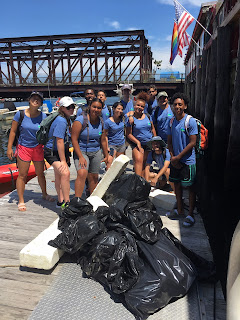 As we all saw on the Fort Point Channel Kayaking trip. There was bags full of trash and it only took us about an hour to get that much in a small area. If that much trash is picked up in a small area just over the course of an hour. Then think about the whole harbor. Its still our duty to clean this harbor.