Not the Crab, you want in your Krabby Patty! 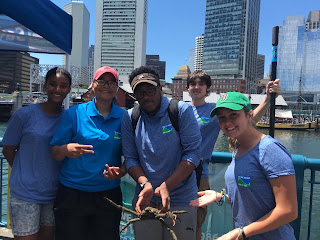 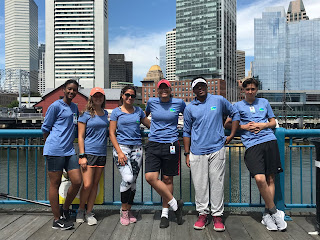 Well we’re diving right back in to another blog. It’s Anthony and this week was my first week at the Boston Children’s Museum. A couple of exciting events happened this week from catching huge crabs and enormous fish to teaching kids how to fish like a professionals. Yet only learned about a week ago. Most of the week was very slow and not much was caught but it was still exciting meeting brand new kids! On Tuesday, the day started off normally  with slow activity from the crabs and people, it seemed it was gonna be like yesterday. Luckily that wasn’t the case,  out of no where a line we had pulled to our surprise. The rod started to bend and something tugged the line. When it got to the surface I couldn’t believe what I saw, a crab! Huge and hooked on the the rod. In comparison, this crab made the others look extremely tiny! This guy was at least 10 green crabs side by side. Right before it got above the water however, it let go and sank back to the bottom. This giant crab would be back. It turned out that the crab was a spider crab. Fully grown and scary looking, but that didn’t stop us from trying to get him again. Over and over again we all hooked the beast, but time and time again the beast evaded us. Even a net was brought out, to get him. But each time we tried, we failed.

Fast forward through the day, it’s right after lunch. A man with his son come by to fish. By now the Harbor is at low tide or at least close to it. I thought the chances of catching the spider crab were slim, Too small and maybe if  the chances were small we would all give up. However when the man reeled the rod in, the rod bent a little and there was a little resistance. I had thought that maybe a small crab was on the line, but boy was I wrong. Right down there the beast rose up. I grabbed the net and was ready to catch. He would not get away this time, the hook was in the spider crabs mouth. He brought it up to where I could get it with the net and boom. The beast was caught, we finally got the beast. It was huge and scary. Like it’s name, it looked very much like a spider, but it was a crab. This was the catch of the week in my opinion and that’s saying something since we caught a big striper the same day. The reason the spider crab beats the striper in the catch of the week for me is how hard we all fought to catch the spider crab. Constantly hooking it but not catching it made it so when we did catch it, it had more meaning than the striper. Anyways, I’ll catch you later. It’s been reel.