HELLOO PEOPLE! This is Alex back at you with a WHOLE NEW site, called All Access Boston Harbor. Here at this site, we go to different islands in the harbor. Although in the first week, the only island we went to was Spectacle Island. We gather all the people first, then after we gather on all of them, we get them on a thirty minute boat ride to the island. On Tuesday, we met with a group of deaf people who were signed up for the fishing trip. At the end of the week, we had a staff get together at Peddocks Island, where we hung out at the beach. 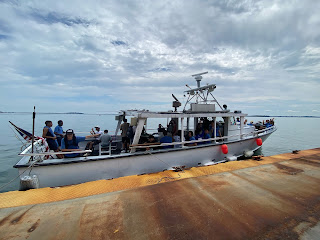 This brings up the question about how are we able to communicate with people who are unable to hear, and only able to see what happens. Now, to overcome this challenge we had interpreters, but that is an easy escape goat out of this situation. Personally, I feel that people get half of their understanding of others through speech and whatnot, but the other half comes from the body language and how one would show themselves to the world. If you give off a friendly and accepting type of body language, I feel that those who have trouble communicating would feel more inclined to try and make a bridge between you two.

Many situations can arise where one party would feel threatened or hurt from an action that you yourself thought wouldn't be that big a deal. One case would be where the deaf group were offended when we didn't have their name on the whiteboard, but they didn't realize that we had lost the marker. By otherwise giving more information or explaining the situation, the problem would be resolved. However, by acting angry and ignoring the other side of explanations, they would just become more and more frustrated and focused only on their bit of information of the situation. Moments like these reminds you of how not everyone thinks or feels like yourself and you have to remember that other people need more or even less words or actions to comfort them. 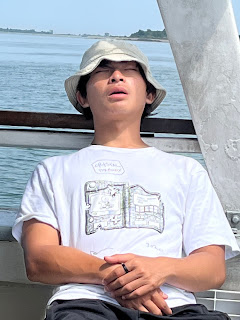 See you on the harbor,