This week I went to my new site and I’m now helping out with All Access which we bring groups of people to the Harbor Islands. We let different groups of people come fish with us out on the dock. This week we went to Spectacle Island and we set up a touch tank. We had two groups come, fish with us , we ate some snacks, and we talked with each other in our groups, which is Maria‘s group and Melanie ‘s group. Afterwards Maddox ,Julian and I walked up the north drumlin until it was time to head back to the boat which leaves at two. Tuesday we had everyone there we met at the office got supplies and headed to the boat David gave his big speech about Spectacle Island and how it came to be to the groups we were bringing to the island and then we were off on our way. I had a really fun time. I was at the touch thing teaching people about green crabs and we got to name some of them. I named one Thomas and Ruben name one Ted. Thursday we had a staff meeting and our All  Access group got canceled because it was extremely hot outside and our fishing trip also got canceled because of the weather so I was put at Pierce Park. They split up our group.I was with Fatima's group. It was really fun meeting the members on her team. It was nice seeing what their day was like. Sadie was at the touching and  she was talking to the kids and Fatima and Aleena we’re cutting weight  I was fishing with the kids and so was Albert, Harry and giacomo soon after we went on our lunch break and we walked to a place called dirty dough and Sadie brought us there then we went back to see if we’re gonna have another group but the kids rather wanted to play in the sprinklers which on a day that was really hot I would too.

See you next time on the water - Ari 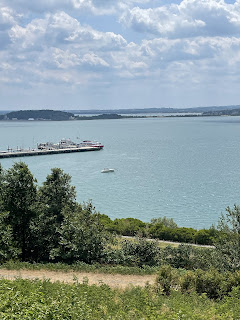