The Wonderful Waters of Week 3

Hey everyone, it's Will again. I had a very exciting third week at Save the Harbor. I went on a fishing trip early in the week and a beach bash later on. The fishing trip was exciting because there were a lot of kids and they caught a good amount of Black Sea bass. Once again, I failed to catch a single organism but I'm not upset about it, I still had fun. Spectacle Island on Tuesday was somewhat of a drag. Not in the sense that it was boring, but the heat was a little overwhelming. The fishing was good, we caught an insane amount of green crabs and quite a few spider crabs. I didn't get a chance to go into the water but I'm sure it would have been super refreshing. The beach bash was also extremely hot. There weren't many kids that went to it but it looked like everyone was having fun. It was the first one of the year and I think it went really well. It was very organized and nobody seemed stressed out about it. On Thursday, we went to George's Island and the heat was simmered out by the amount of wind there was. One kid caught a massive green crab, the biggest one I have ever seen. It was a very successful week in my opinion.

Green crabs are crustaceans that have invaded our harbor. They are European green crabs and travelled over here on boats that came from Europe. They are typically 60- 90mm when fully grown but can grow to about 100mm when outside of their native range. They are found virtually on every coast around the world. Even though they are known as green crabs, they come in different colors like red and brown. They normally eat kelp, eel grass, and scavenge meat. Females can produce up to 185,000 eggs. Larvae develop offshore and juvenile crabs grow in the intertidal zone.

Black Sea bass is a species of marine ray- finned fish. Typically found near rock jetties, Black Sea bass eat crabs, shrimp, small fish, worms, and clams. This fish has a maximum length of 26 inches They are found anywhere along the coast from Maine to Florida. Black Sea bass spawn in coastal areas from January to July.

Next week I'm excited for going to the Islands. I love All Access and I'm so glad that I've been able to work there for the past month.

See you on the islands one last time this summer, 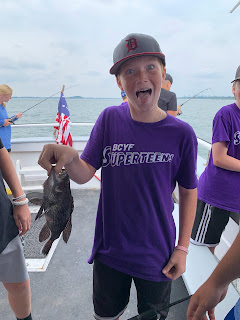 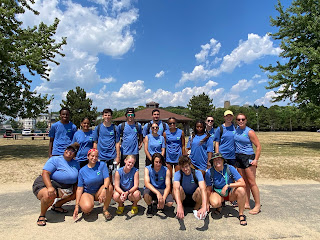