I got assigned to a new site, Camp Harbor View, this past week, which has been super exciting. Instead of heading out to Spectacle and George's Island, which I'd been doing with All Access, now my team and I take a different ferry to Long Island. No, not that Long Island. This was my first time actually seeing Camp Harbor View, and now that I have, I can say I totally wish I had been a part of the program when I was younger. My favorite part about being there is how energetic the campers and their counselors get. The Great Hall is always super rowdy at meal times when each group of campers ("lighthouse") screams out their own version of the Shabooyah Roll Call chant, competing to be the loudest and as a reward, get served their egg sandwiches before everyone else. It can be a bit crazy sometimes, but it makes parts of your everyday routine way more fun in my opinion. At the end of the week, we got to see a bunch of the counselors sing and dance in the Counselor Talent Show, which was also really entertaining.

As usual, we spent most of our time between the fishing station and leading groups on walks along the shore. Even though we mostly caught green crabs and spider crabs, this week we did actually get lucky for once and reel up a skate, which flopped around on the deck for a bit before Madison managed to pick it up from under its belly. She totally shouldn't have gotten credit for catching it, though - it was actually some kid who happened to be standing next to her at the time, but that's never how people in the group remember it. 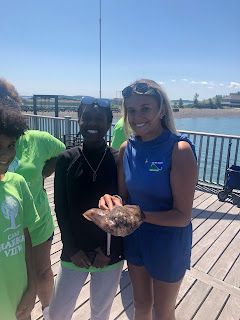 Because I misidentified the skate as a stingray at first, I had to give the species a quick google to learn a little bit more. Apparently, my mistake was pretty understandable, since both skates and stingrays belong to the broader category of "rays" (from the superorder Batoidea) which applies to more than 600 different species. They're alike in the flat, wide shape of their body, and the fact that their skeletons are made entirely of cartilage, rather than bone -- just like sharks! Beyond those similarities, though, there are a few ways you can easily tell them apart. Skates are usually smaller than stingrays, don't have a venomous stinger, and have little thorny bumps on their backs, which is what made the one we caught so tricky to pick up! One other interesting difference between the two species is that skates lay eggs, which appear in a dark pouch sometimes called a "mermaid's purse", while stingrays are viviparous, which means that they actually give birth to live babies. Cool, right?

On a final note, I thought I'd mention that the coming week will be my last of this summer at STH, since I finish on the 19th. I've had a great time working here this summer - I plan to enjoy my last week as much as possible, and I hope you will check out my final blog because it'll be a certified banger! Thanks for reading, and
see you all out on the Harbor!

Article on Skates vs Stingrays