Week 6 at BCM: The Skate Spectacular!

Hi everyone! This week at Boston Children's Museum was a blast. We caught two skates and a Striped Bass at the museum on Tuesday and crabs every day. We had a lot of fun finding tunicates under the dock and showing them to our visitors. It was a great week overall!

A week in the life my site is always exciting and new. For most of the week, my group is stationed at the Boston Children's Museum on Tuesday, Wednesday, and Thursday. It's a great place to be because it's shady, it has a good view, and you can feel the breeze that comes off of the water. At the museum we service families (most of whom are headed to the BCM) and the museum camp group once a week. The most common creature we catch at BCM is a green crab, and the second most common are skates. The BCM is a great spot to be stationed at for most of the week.

On Mondays and Fridays, my group is posted at Atlantic Warf (Monday) and Mirabella Park in the North End (Friday). Atlantic Warf is right across the canal from the Children's Museum, so we get the same benefits of the breeze off the water and the view. At Atlantic Warf, we host camp groups for arts and crafts and fishing, with lunch after. The most common creature that we catch at Atlantic Warf is a Green Crab. We rarely catch skates, even though we are right across from the water from BCM. At Mirabella Park in the North End, we play games and fish with a camp group to catch green crabs. I love going to Mirabella because it's in the North End, which is neighborhood I don't go to on a regular basis, and it's really fun to explore on Fridays. I also love the fantastic view of the Boston Harbor we get there. Last week we got to see the USS Constitution pull out of the Harbor!

I can't wait for next week. See you on the harbor! 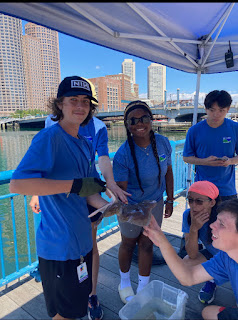 Catching a skate at BCM 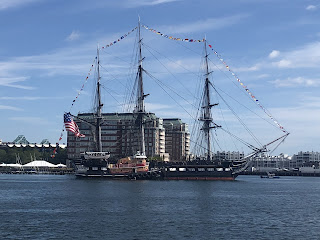