Hello there! I'm back with another blog and I'm so happy to talk to you all again.  This week we were at the Charlestown Navy Yard. this place has so much historical background and is ingrained in the city of Boston. It is the home of the oldest navy ship that is still afloat to this day in america, the USS Constitution. Its other name is old iron sides. I learned this on the harbor tour me and my group went on. When there was a battle between the people in Boston and the British they would fire many cannons to the USS constitution but none of them actually destroyed the ship and one of the people on the ship yelled that the side that was hit had a side of iron. 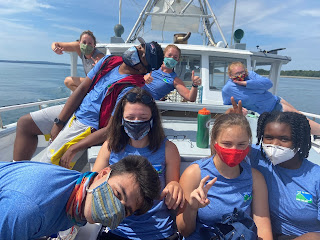 Today I wanted to talk about what I learned while on the harbor tour about how the water quality can really affect the city around it. Just a little context: while on the tour I did my best to try to answer as many questions as I could when the speaker would ask them (even ones that I probably didn't know the most about haha). One that I did catch that I thought was super interesting was the fact that back before the harbor clean up you needed a tetanus shot to even work on the harbor  because of how dirty it was. Also, a lot of the housing near the harbor was very affordable housing because of the fact that no one wanted to live there so if you actually go to the harbor you can see the comparison of the small houses to the huge condos next to them.
Now, after the harbor clean up there were more investors that wanted to build there and they built more land and added it to Boston. Now, the places that are near the harbor have more attractions and now there are little buildings next to huge condos. Those are evidence of the harbor clean up.
Dee
at 11:38 AM