For our fifth week of the summer, we were at the Constitution beach which is located in East Boston. For our deliverable, our team had decided to make a "Where's Waldo" inspired scavenger hunt in which kids would try to find the hidden green crabs in a picture our team member drew. The picture would also have fun facts about the different species of animals that live in the environment at Constitution Beach. Because our work for the week was not as demanding as the previous weeks, our group was able to complete this work without much difficulty which in turn had allowed our group to have more free time than we would normally have. As a result, our group managed to take a last-minute field trip to the Belle Isle Marsh near Suffolk Downs, East Boston. Personally, I had not been by this marsh since 4th grade so it was a huge shock to see how much had changed since I had last been there. I ended up bringing my puppy along as my team and I explored the marsh. The marsh was so different to the other sites we had worked at all summer long, the environment was much more humid and hot, the plant life and terrain were more unique compared to the beaches we had been at but it still held much of the wildlife we normally saw such as fish and crabs. The preservation of this environment and plant life was due to the citizens of Boston who had fought to protect the Belle Isle marsh as a park and a tourist location. On our last day of the week, all of the staff members of Save of the Harbor ended up going kayaking in the Charles River, while we went kayaking last summer at the Fort Point channel, it was nothing compared to the Charles River which was much bigger than the channel. This made it so people had so much freedom to go where they wanted, some kayaked up and down the river while others simply drifted and enjoyed their time on the water. I would have to say that this was one of the more memorable weeks of this summer. 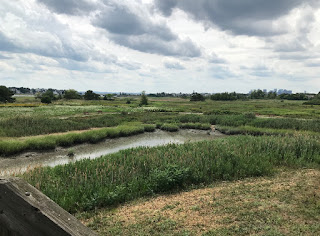 (Belle isle Marsh from the overlook) 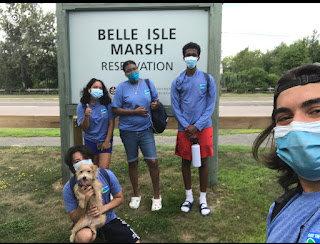 
With Environmental Justice being the theme of this week it is important to note that two of the locations I spoke about have a lot to do with Environmental Justice. Both the Belle Isle Marsh and the Charles river were both home to a lot of conflict and controversy regarding their existence. With the Belle Isle Marsh being the last saltwater marsh to exist in Boston, Massachusetts it was now more important than ever to protect its existence. If it were to be gone or destroyed, then the community would have lost a huge part of the ecosystem in which they were able to actively take part in. But with the preservation of this marsh, it allowed future generations to enjoy this for themselves. The Charles River, on the other hand, was known as some of the dirtiest water in Massachusetts due to local companies dumping their waste into the water, but due to local efforts, the water is now safe enough to go swimming and kayaking. Hopefully, this week's blog was able to inform you about make opportunities in Boston during the summer. Be Safe
-Albert
at 10:58 PM