The Harbor Goonies visited the Fort Point Channel this week and I'd have to say it was a lot of fun. The first day we went out on Charlie's boat for a fishing trip and it was lots of fun even though the heat was killing me. I caught a big black sea bass and it looked really cool. The best thing I saw that day was that Charlie caught two fish on the same hook. The next day we visited the Roseway and played around with the water drone. The water drone worked pretty well and we saw a few fish with it. The people on the Roseway taught us a lot. We learned a little about steering the boat and how to find certain landmarks on a map to find your location. I think the most interesting thing was when they had us do a bunch of tests in the water to test acidity, temperature, and salinity. Thursday was pretty laid back and low-key. We used the water drone again but it wasn't really working so we focused more on finishing our deliverable for the week. Friday was when we went out kayaking with all the groups and that was definitely the best day. We got to hang out with all the other groups and just have fun out on the Charles River. The water splashing against my face was cooling me down as the sun was beating down on my skin. Our staff got us sandwiches and food after so thank you for the treat!
I would define environmental injustice as communities facing an unequal exposure to pollution and poor environmental conditions. The Office of Environmental Justice was created in 1992 to address the needs of vulnerable populations by decreasing environmental burdens and increasing things that would benefit the environment. The Office of Environmental Justice provides workshops and training for internal and external stakeholders so they can learn about the broad range of issues that relate to environmental justice. In my small town of Holbrook, we have a small lake in the center and it's called the Grove lake. The Holbrook Chemical Corporation was placed right near it so they were putting all of their toxic waste into our freshwater lake. We can hold peaceful protests to inform people about the pollution going on in smaller communities. I should care about environmental injustice because even though it may not be happening exclusively where I live, the Earth is everyone's home and we should be taking care of it. 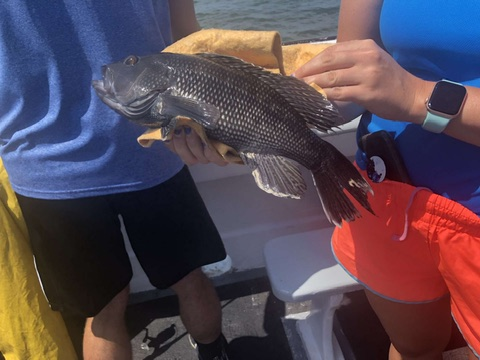 A picture of the Black Sea bass that I caught The ICA building that we used the water drone near