Heyy everyone,
This week my group and I got to hang out at Carson Beach! We set up a piece of paper as our mural with the question "what's your favorite thing about Boston's Beaches?" written at the top. We asked people to answer that question by drawing or writing and got to hear their stories which was really cool to hear. We dug for clams and my shoes got really muddy so that was kinda sad but it's fine. On Wednesday our group got to go out to Spectacle Island with David Coffin who told us all about the island and its history. We collected some cool sea-glass, I really liked finding the bottle necks and pretending they were rings. After leaving the sea-glass on the beach we hiking up to the top of the island which was quite the workout, but once we got back down we got to swim and that was great way to end the day. To wrap up the week we had a little staff kayaking trip on the Charles, also QUITE the workout, but I got to talk to other groups I hadn't met yet and friends I hadn't seen in a while, I had so much fun :)). 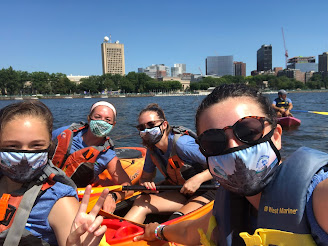 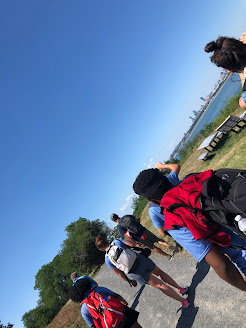 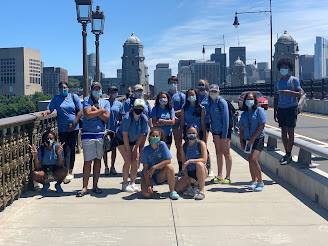 This week we have been talking about environmental justice, which is giving everyone the resources they need to protect and clean their environment regardless of race, color, income or anything as well as enforcing environmental policies. The Office of Environmental Justice has done some amazing work such as assisting overburdened and under-served communities to find solutions to local environmental and human health challenges, creating youth programs and workshops to educate, reducing disparities in childhood blood lead levels and making sure all people served by small community and tribal water systems have drinking water that meets applicable health-based standards. I think making sure everyone has clean drinking water is one of the most important and interesting steps that the OEJ is taking for environmental justice. So many diseases are caused by unclean water and if cleaning it can keep a small community safe from an epidemic then it is so worth it. No one should have to worry about whether or not the water they're drinking is safe or not, environmental injustice is a problem everywhere and the OEJ as well as Save the Harbor are doing our part to try and stop it. An example of environmental injustice occurred in Flint, Michigan during the water crisis. Almost half of those who live there are below the poverty line, and more than 50% are people of color. Flint residents noticed the water quality drop almost immediately, and began to complain about it. State Officials responded by publicly dismissing those concerns and to issue false assurances to them. They were ignored by the officials who were then slow to respond to the problem because the neighborhood didn't have the resources they needed, a classic case of environmental injustice. Another example of environmental injustice that relates more to our city is the number of hazardous waste sites in lower income communities. In an article written by Northeastern, there was a chart I read that used a system that gave each waste facility points based on how dangerous it was, totaled with the other facilities in each neighborhood. Comparing those points with the income rates was astonishing. In Downtown Boston (low income area) there was a total of 224 points, verses Charlestown (medium income area) that has 134. A significant difference and a clear example of environmental injustice. To spread more awareness about this injustice we can educate others as we are doing with this program and like we did in our video at Carson Beach this week. Environmental injustice is something you see first hand in Boston, the nice beaches in some neighborhoods verses the ones in bad shape and that no one really goes to because they aren't cleaned up like others. It's such a sad thing to see in your own city, knowing that there is such a gap between your neighborhood and someone else's. Working for Save the Harbor you also get to see those sites and the difference in how each of them look, but now we have the power to educate others and to speak out about it in our videos, and I am really grateful for being able to make change.
Sea you out there,
-Jane