My group and I were at Constitution Beach in Eastie this week. We worked hard to put together our video which included a game we called Invasive vs. Native to have the kids try and figure out whether a species is invasive or not. We did some sand raking and made some cool cartoon characters, used a net to catch some small fish, went swimming, played some fun games, and learned about Eastie . Overall the week was really fun and I'm going to miss that beach, the temperature was pretty perfect out there this week, and we got to see planes taking off and landing pretty close up which was really cool. 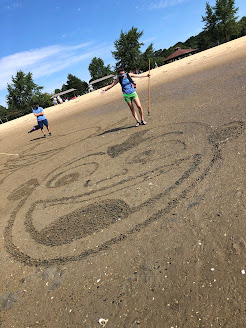 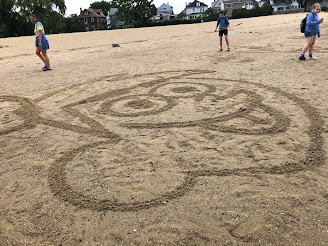 Aang The Last Airbender                                       Timmy Turner
This week, the topic we've been discussing is water quality, which not only affects the ecosystem, but has an impact on us as well, through the food we eat, water we drink, clothes we wear and so much more, that's why it's so important to monitor it. In Boston Harbor, some challenges to maintaining that water quality is the fact that climate change brings more extreme weather and storms that reduce the quality quite a bit. According to Save The Harbor / Save the Bay the water quality of Boston beaches over all dropped from 94% to 88% because of the excessive rainfall from summer storms in 2019. Rainwater can be a carrier of bacteria, parasites, and viruses and is a big reason for the spread of some diseases, so it makes sense if there was a lot of rainfall that year that the water quality was lowered. In the same article, apparently the 2 cleanest Boston are both in South Boston (Pleasure Bay & M street), while the least clean beaches are King's Beach in Lynn and Tenean Beach in Dorchester. This may be because those beaches are still working on improving their water quality by fixing pipes and such that could be a long process that covid 19 has probably made even longer.

There are many tests that can be taken to see the quality of water, and one of the most common ones is the pH test which measures the acidity of the water. Another common test is the nitrate and phosphate test which is a good indicator of strong plant life, but artificial nitrate and phosphate from fertilizer or sewage can be harmful. A bacteria that can be common after a large rainstorm is E. coli which is a bacterium, and when there is a high consistency of them they can indicate that the water quality is bad. They may not be harmful themselves but when there is a lot it is probable that other dangerous pathogens are also present in the water so beaches could be unsafe for swimming. There are ecosystems that can purify their own water though like forests and wetlands that can remove sediments from runoff, as well as certain animals like caddisflies that build nets that filter the water and black flies who filter with their antenna.

I asked my dad if he remembers what Boston Harbor used to look like and though he didn't go to the beach much he does remember how dirty it was and I remember when I would ask him if we were allowed to swim in the Harbor and he said he didn't think so because of it. Compared to today, obviously we are allowed to swim there and it is a low cleaner now as the reports of water quality show. I'd post pictures of the beaches and let everyone know how great they are and tell them to go to one near them to enjoy it as much as I am.

Sea you out there,