Excited to be starting my first summer at STH!

Hi everyone, my name is Alex Messier, and I'm super excited to be starting my very first summer here at Save the Harbor! I'm a 17 year-old rising senior in high school, and I live in the South End/Back-Bay area of Boston.  Some of my interests include playing electric guitar, watching anime or shows on Netflix, and sometimes drawing. I also like to stay active, so I play baseball, run cross country and play a bit of pickup basketball.

I'm super grateful to have been given the opportunity to work at Save the Harbor because the program's mission is something that definitely resonates with me. I think that advocacy about clean water and marine conservation is very important and I've heard a lot in the past year about the buildup of micro-plastics in water bodies, which is pretty concerning. In my opinion, everybody should be aware of these issues, both because of the possible effects on our livelihood, and also so we can conserve our oceans and the plants and animals that live in them.

I am part of Team Jason, which is a super dope group of people, and I met with them for the first time over Zoom on Monday. 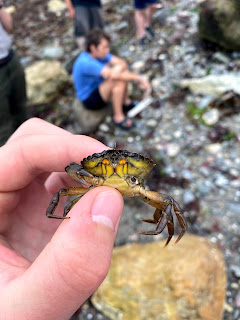 On Tuesday, we walked around Short Beach, and looked for different animal species. There was a ton of kelp, and someone in our group found squid eggs on the beach, which looked super weird. Later that day, we got to meet someone from the National Parks Service, who taught us about bivalves and different types of invasive species. After she told us about them, we got to walk around in the tide pools and find some of them on our own. I managed to find a lot of green crabs and orange tunicates, which are these squishy, blob-creatures that look sort of like a tongue. These particular tunicates were actually colonial, which means that they were made up of a ton of different organisms called zooids held together in a protective structure (which is where the tunic part of the name comes from).

On Wednesday, we went to Revere Beach. We focused more on the demographics of people we saw there, and tried to answer questions about who had access to the beach, what groups were represented there, who was there at the time of the day, etc. We also used what we learned the day before to identify different shells we found. The most fun part of the day was going swimming, and playing volleyball together. 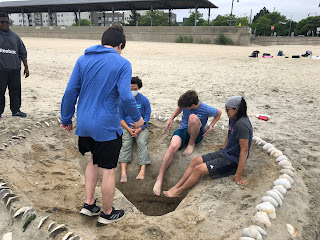 On Thursday, we went to check out Rumney Marsh. While we were there, we got to see a variety of different insects, (all of which seemed equally interested in biting us) and a bunch of different types of birds. We even got a close look at several red tailed hawks, which we found as they were eating an unlucky squirrel. 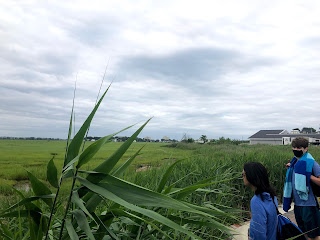 It was a really great first week, and I think it set the tone for what I expect to be an exciting summer of learning. I super hyped up for next week! 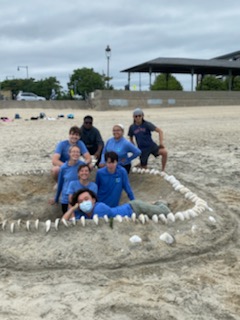