Oh hey, didn't see you there! Kidding, its a blog, of course I didn't. But now that you've finished cringing at that terrible joke, let me tell you all about what Team Jason was up to this past week.

On Tuesday, we commuted out to Quincy to go fishing at Wollaston Beach. While we were there, we learned how to attach a hook and weight, as well as how to bait a line, all of which was new to me.  I don't think we managed to catch any fish, but we did catch a bunch of hermit crabs, and I got to practice my casting, which in all honesty was pretty abysmal. I do think that I got a improved a lot, though, and it was fun to wade out into the shallow waters looking for clams and small fish. Overall a fun day.

While I was expecting that we would spend the afternoon on Zoom because of the poor weather forecast, I was pleasantly surprised on Wednesday morning to get the text from Jason that we would be going to Spectacle Island. Events like the Beach Bash, where we coordinate trips for youth groups, are super fun and rewarding, and this trip was no exception. The ride between Boston and Spectacle was quick, and while we were on the ferry we played duck-duck-goose with some of the kids. Once we got to the island, Team Jason was the first group to run the fishing area. We must have bad fishing mojo or something, though, because for the second day in a row we caught only a few confused hermit crabs. Later we had some time to spare, so we decided to conquer the mighty North Drumlin, a walking trail that wraps around Spectacle Island (if anyone calls us out on that, we've got the stickers to prove it). We had just enough time after the hike to go for a quick swim, and we wrapped up the day by riding the ferry back to Boston. 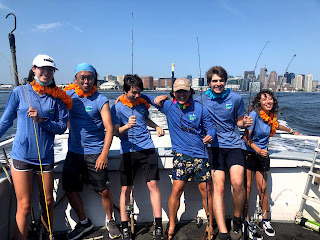 On Thursday, Team Jason went out the harbor for a fishing trip with Anna's group, which was by far the highlight of the week. Let me tell you though, if I thought cutting up squid the day before was slimy, that was nothing next to the live bloodworms we were using as bait. I mean, each time I had to bait my hook was its own battle against these things, which were completely determined to wriggle out of my hands every time I picked one up of the box. The fishing part was great. It really tested my patience at first, because for the first half hour or so I was at the front of the boat, and only people near the back seemed to be getting anything. Once I switched spots I had much better luck, and all the waiting made it that much more satisfying when I did manage to catch a fish. Unfortunately, of the two fish I hooked, both of them must have been either physically gifted or lucky, because some chance, miracle, or act of God BOTH of them manage to catapult themselves off my hook as I was about to grab them with the towel. Ridiculous. Even more fun than the fishing itself was just the experience of being driven around the Boston Harbor on a really nice day. On the way back, we connected to AUX to play some music, so of course Albert was going off (the way he always does). As if a good day couldn't get better, the guy at ShakeShack gave Albert, McRae, Ari and I free frozen custards. That must have been our reward for another busy week of saving the harbor :)