A Wonderful Day Full of Waves!

Today started off as usual, having the groups arrive in bits and pieces and as the clock ticked towards 10am, the staff and I brought them over to the larger tent where David made his pre-departure orientation. I then left earlier to lead the groups down towards Commonwealth Pier to get on the Provincetown II. As I was walking, a little boy pulled up next to me, introduced himself as Peter, then continued to bombard me with questions. I answered them all with my entire wealth of knowledge and he finally stopped asking me questions when we had to go on the gangway. I never knew I had known that much about Spectacle Island and Boston Harbor! I felt very proud of myself and by the time the boat finished docking at Spectacle, i had answered many more of Peter's questions. 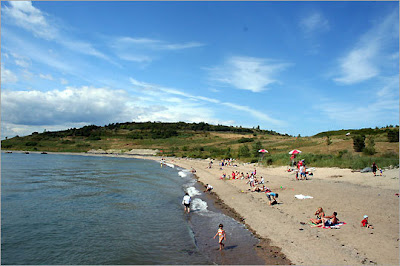 I went into the visitor center and chatted with the two rangers there - Kevin and Dennis. They helped us sign up for kayak tours for the 5 lucky teens from the Catholic Charity Group. As the 5 headed off with Kevin to learn how to kayak and put on their life jackets, I headed off with Carolyn, Brianna, and David to the South Beach to look for sea glass with some of the kids already there.
One of the kids found a marble (!!!!) and tons found red. But I was extremely happy to say that I found ORANGE! Orange sea glass is the rarest color to find and is the the fourth one I found in my entire life!
After finding this amazing piece, I walked back to the visitor's center and left it on the table with many other treasures people have found over the summer and walked off into the beach. Today was so hot that I immediately jumped in and splashed around and saw Peter! We joked around for a few and cooled off. I had such a beautiful day and I'm excited to see what is in store for the last day of Spectacle Island tomorrow!!

All the best,
Thi Tran