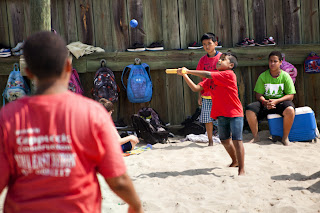 Some would think throwing a beach party is already hard enough but how about a beach party with nearly 700 kids.The party was a lot of fun, I directed the sports section along with Anthony, Leon, and Andrew. It was a lot of fun and something new because I met a lot kids I didn't meet before and a few that I met the day prior to the party. Most of the kids from All Access and I even met some kids from Winthrop who I taught to swim and a lot from the East Boston YMCA. The highlight of my day was when Alie called Candido, Vinh, and I a fish. It was funny because the children could go out into the water only until their belly button while I stand 6'4 and I was no where near the sand in the water. Candido is a true force of nature he can  backstroke for however long and anywhere in the water while I just did my signature shredding of the water.

Serving the food most have been the hardest part of the day. Me and Will gave out so much cold water that we had no feeling in our hands for a good 35 minutes. It was upsetting telling the kids that they couldn't have a drink until they had a hotdog. After I regained feeling in my hands I ate and enjoyed the rest of the day. It was a lot of fun.