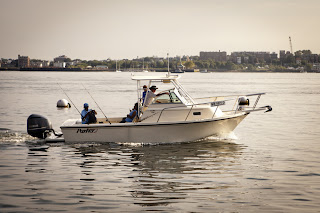 This week at work has been like none other. I did a lot of new things that I wanted to do for a long time. The fishing derby was the climax of my week, I enjoyed it so much. It didn't put a burden on my day that I didn't catch fish because I really enjoyed myself. The boat went really fast and waves were fun to hit. The captain taught me all about the boat just like all the parts of a fishing rod. He showed me the cabin which had a portable bathroom and the accelerator, the motor which was a Yamaha 220 four stroke. We went deep into the harbor and even did a little island trivia which I had a lot of answers for. The fishing derby was a fun and interesting trip.

Earlier in the week I set out on a adventure on the Provincetown 2. We went to George's island an island I never been to with Save the Harbor. All the children spoke about how eager they were to battle the dark tunnels. After a small tour of the island we went into the fort and tried to explain what specific rooms were such as the kitchen. The children didn't find that interesting at all so we made way to the dark tunnels. Since I'm the tallest and Leon was guiding them into the tunnel, the children grabbed onto me and walked with me down the tunnel. The kids were really happy when they got out and wanted to go back in but there were other visitors ruining the experience for the children. We asked them to turn off the flashlights and cellphones so the tunnel could be really really dark. The kids loved it and David made it even better being the one that mysteriously took my hat in the tunnel. This week has really made my experience at Save the Harbor amazing.