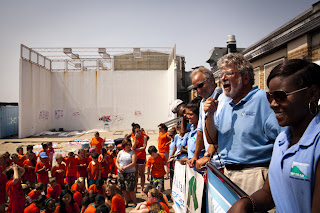 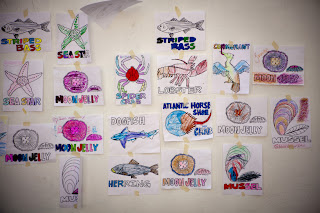 Hey everyone on August 17, 2012 the Save the Harbor/ Save the Bay staff enjoyed a day with all the camps of kids that we have taken on All Access Boston harbor with us this year. We were just celebrating the time that was spent during the summer together, what we have learned, and having such a BLAST ! This was my first beach party with Save the Harbor / Save the Bay and it was quite an experience considering all the things we had to do to prepare to cleaning up at the end of the day. I was put at the Art Station with Thi and Carly. We had so much fun watching everyone soak up the sun while we had the only shade on the whole beach. The kids had a chance to write their names on a scale to put on the big fish we drew out and to see how many of them actually participated was incredible. After that was done we got to color and hang up the artwork whether it was finished or not. We learned that the kids really enjoyed themselves and that it was another experience they can say that Save the Harbor / Save the Bay actually did an awesome job with if I may say so myself. Despite it being so hot that day was fun to resist the erge to get in the water or cool off anyway until Bruce announced the big SPLASH ! The splash was a huge relief. 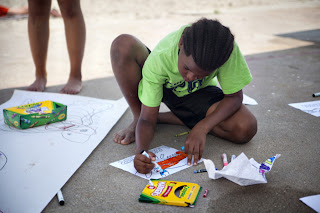