Hey everyone!! I’m back with a whole new blog!


This week I worked in a new site (Blacks Creek). As usual I was excited to see what this site was like and I was wondering how those wonderful kids were like. But also, I a little bit nervous because that was my very first time ever at that site.
At Blacks Creek the kids went to an adventure where they were exploring for creatures. Since they were so excited and competitive,I gave them a challenge which was that the one who find the most creatures would win, would get to keep them in another touch tank. The kids found Hermit Crabs, Snail Crabs, Sea Snail, and Rock Crabs. The winner was a little girl who found 6 Sea snail and around 8 Snail Crabs.

Beyond explorers and princess, among the kids there was a builder of pools who decided to build one for all he's creatures that he found, but specially for his crabs who he loved the most out of all. With the help of the princess and myself, Jimmy built his pool with the same material that the princess used. As the the pool was coming along, the other kids were getting attract by his creation, that they decided to join us. They all contributed by building the walls or carrying the water. They were all excited and even myself because they all worked together without complaining or arguing. They also give each other a try to do the fun part which was to throw the "magic water" (that's how they called it) to the broken red bucket, making the water flow to the broken part of it. 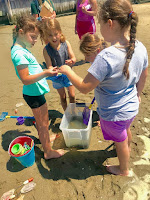 Wednesday it was a little bit different. Instead of going to the office at 12, we went to Curley Community Center. The receptionist had us walking back and forth trying to figure out where we supposed to give our session. Imagined a huge bucket filled with water and tons of crabs with someone holding it, as that person walks without knowing their destination, under the hot sun. Now, that right there my friend is what I called a tough situation! As the kids finished introducing themselves they grab their nets and searching for grabs and snails. The water was freezing but that didn't stop them from exploring. Getting their clothes wet didn't bother them either. They enjoyed every single time they found a creature. It didn't matter if they had 6, 7, or 10 Sea Snail, They would not stop searching for more and more.

On Friday I worked at Constitution Beach. Were we was teaching the kids how to Fish print. Also we brought a Lobster real so that the kids can touch it while we explain some characteristics of the it. There were two things I enjoyed the most. The first one was that when my co-workers went to get the crabs from the Crab Trap, even thought it wasn't a lot, there was 3 perfect size of crabs. A baby crab, medium crab and another medium crab without a claw. The other one was the Sand Ranking. I really enjoyed it because the kids were able to think and demonstrate their skills and art true the art of Sand Raking. They thought of different species and things that can be found in the sea.

Stay tuned for my next blog!! See you later