Yesterday, (Monday, July 9th) was only my second time ever working at Piers Park and my first time there this summer. It was also the first day of a week-long camp session for many of the kids, making Monday a day filled with new experiences for both the campers and me.
We started the morning off by introducing ourselves and playing some icebreaker games, which was a good way for the campers and staff members to become comfortable around one another. Later, we took the campers to the dock. for some water involved activities. The campers either went sailing, fishing, kayaking, or just checked out the crabs we had caught. I was mostly helping the enthusiastic campers fish, we were not able to catch any fish but many of the campers were able to fish for the very first time, and in that regard we were successful.
After about an hour it was time for lunch and a "free time" break. Once we completed our lunch break the campers learned about recycling and keeping their community clean, this lesson was followed by a trash cleaning trip around the park, where the campers and staff picked up any trash they saw. After our earth saving walk, we once again headed to the dock. This time we were more successful fishing, as one of the campers caught a crab on his line. It was a really cool moment for all of the campers as they saw how exciting fishing can be. After about another hour on the dock, it was time for us at STH to leave, bringing an end to an exciting and enjoyable day. 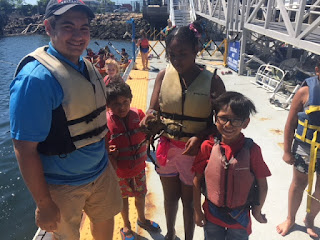 
The very next day (Tuesday the 10th) was Camp HarborViews first fishing trip of the year and I was glad to be able to be a part of it. We started the day by meeting the campers in the Seaport area and then Captain Charlie came on his fishing boat to pick us up. Some of the Campers had never had the opportunity to be in a small boat, so they were excited from the jump (before they even caught any fish). Once we were all on board, Captain Charlie explained some simple safety rules and then we were off! We headed toward the outer parts of the Boston Harbor, near Camp HarborView, where Captain Charlie stopped the boat so we could drop our lines in the water for the first time of the trip. The Campers instantly started getting bites on their rods, catching a flounder, Skate, and Crab in just the first few minutes. And many of the Campers continued to catch fish and other sea creatures in the other spots we fished at. However there was one camper who hadn’t caught anything towards the end of the trip and she was very upset. Luckily, the next time we docked the boat she caught about 5 crabs in about 20 minutes, and she was ecstatic.

This was a great way to end the fishing trip, as every camper had caught either a fish or crab, and they were all happy and thankful to be able to participate in the fishing trip. Hopefully the next CHV fishing trip can be as exciting and successful as the first, but those are some very high expectations. 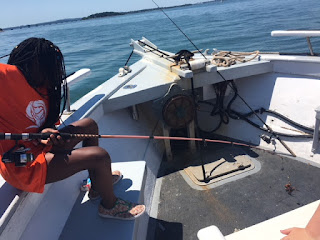 The moment when one of the campers caught a crab on their fishing line.