The summer activities are in full swing at Piers Park Sailing Center, Courageous Sailing Center, and Community Boating.
The usual programming occurred on Thursday morning, collecting the usual assortment of crabs off of the floating dock at Piers Park. After the morning session, we headed to a new location for the afternoon. We found ourselves at Community Boating on the Charles River. This was a change of scenery compared to the other locations we had visited for it was located in freshwater. Because the Charles River empties into Boston Harbor, it is important that we also maintain its health to ensure the health of the harbor. The midday heat deterred any efforts to catch fish, however we were still able to observe some of the other organisms that call the Charles River home, such as a group of mallard ducks.
With Friday came the rain, but that did not stop us from having fun at Piers Park. We spent a short time on the docks and then headed up to the tent for shelter and more controlled activities. The theme of these activities was salt. Some of the questions that were answered were “How much salt is in ocean water?” “ How does salt affect the way objects float?” “And, if salt content in water could be determined through taste?” The harbor explorers sampled water from several cups of water with varying salinities and were able to rank them based on the taste. We used refractometers to test the salinity of the sea water, consisting of adding some drops of water to one end of the device and then looking through the other to read the chart. Next we did an egg drop test where three cups of water, one without salt, one with some salt, and one with a lot of salt were used. The kids placed an egg into each cup and observed the egg’s behavior. From these observations they were able to determine that the egg floated when there was a lot of salt, but sank when there was little or no salt. This brought about the discussion of density and how the addition of salt to the water made it denser, allowing the egg to float. 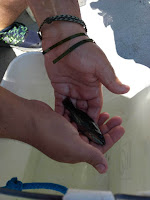 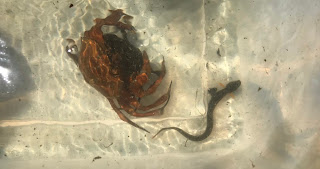 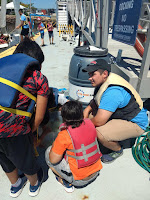 After a week without any fish caught, Monday brought some good luck. We baited the crab and minnow traps early with mussels from the dock and with hope lowered them to the bottom. Our first pull of the minnow trap didn’t produce anything, however the crab trap yielded two small cunner which garnered the excitement of the harbor explorers. The traps were placed back and lines were cast with high hopes of fish to be caught. Fishing
was slow and only one green crab was landed early in the day. The traps were checked again, this time a small but beautiful rock gunnel had found its way into the minnow trap. These fish allowed us to describe the behaviors of other organisms that inhabit the harbor
and how they interact by placing them in the touch tank for observation.  In the waning moments of the afternoon programming, one of the harbor explorers, with the help of Kiya, landed a spider crab of considerable size, topping off an already great day.

We are heading into the rest of the week off of the momentum of Monday, hoping to be able to share more knowledge about our harbor.
at 11:21 PM