What's Up With Stanley? Wk1

Welcome, welcome, welcome!  Week one at Save The Harbor.  Boy oh boy was it hot this week.  Currently, my site is Piers Park and we have a fairly large group of kids. The first thing we did when we arrived at Piers Park was play icebreakers with the kids. We played games like Indian Chief, Where The West Wind Blows and Capitan’s Coming. There are some really competitive kids, Save the Harbor staff and the camp counselors in our group and it really showed during the games. Luckily for me, I’m a natural at Capitan’s Coming so I took the W. Save The Harbor staff with the wins. You’ll see a picture of me holding my trophy a little later.

Since most of the Save The Harbor activities are on the dock at Piers Park, we set up a Crab trap and a Minnow trap. We usually use muscles for the crab trap, which are found on the side of the dock right under the surface of the water. One of the times we pulled up the crab trap, there were at least 8 grabs in there. Varying from Green crabs to Spider crabs and the most commonly caught at Piers Park, Rock crabs.

Some of the kids were afraid to touch or hold the crabs because of their pinchers, but after showing the kids how to properly grab them so they couldn’t get pinched they became more willing to touch them. Occasionally there would be a crab missing a pincher and this one boy named Wesley would always ask if they would grow back because if they don’t then the crab won’t be able to defend itself. Wesley is one of my favorites (even thought we probably shouldn’t have any) because he’s always very willing and excited.

On Thursday after our weekly staff meeting, the Piers Park group went to Community Boating on the Charles River to teach a lesson about the Harbor and to take the kids fishing.  Since the group at CBI is older than the one at Piers Park, some of them had fishing experience so they got right into it. There is absolutely no shade at CBI so my visor saved my eyes from burning from the sun.

SUN SCREEN IS A MUST AT ANY LOCATION!!!! THE SUN IS HOT AND DAMAGING TO THE SKIN and I should probably take caps lock off so this psa doesn’t seem like an attack. Hahaha sorry if I scared yah.

I almost forgot, we caught a HUGE spider crab and I’ll show you guys a pictures of hat because when I say the kids at Piers we’re terrified I mean it. But after we explained that spider crabs aren’t like Rock crabs so they won’t try to pinch you but they’re very strong.

Well, once again we end the week back at Piers with our group.  I guess we'll have to see how next week goes.  Hopefully some of the kids come back next week.  Catch y'all on thew flip side!! 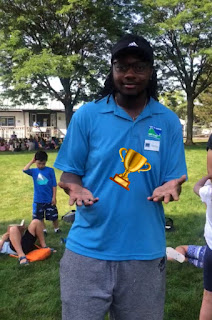 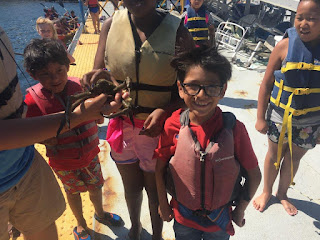