How is week two already this exciting?!

Beware: If you have any type of heart condition you may not want to continue reading this because the amount of excitement you are about to endure is overwhelming. You’ve been warned.

This week started out like any other monday in July as we boarded the Provincetown II to go to Long Island in Boston Harbor. Once again it was a very hot day at CHV sitting on the pier but there was one thing that kept us on our toes. We caught 3 skate and one flounder which is a lot for one day. The thing about skate is that none of the kids want to touch it and the staff have to be careful because they have spikes on them. It is very important to get the hook out as soon as possible while making sure that the skate doesn’t swing its tail and hit you. Usually our senior harbor educator, Jules, does it voluntarily which is great because I don’t have to! We also caught a HUGE spider crab in the lobster trap that was DISGUSTING (I also let Jules deal with that). Like I said before, Monday was a normal day at CHV but the next day, Tuesday, is where all of the excitement starts.

Tuesday was the fishing trip for the fishing club which is a group of kids we fish with everyday after lunch. We got on the Belle with Captain Charlie, the best captain in the City of Boston by far. He took us out to various locations around Boston Harbor where we used some nasty sea worms to catch flounder. Once again we caught some skate but we caught some flounder and a mackerel as well! One of the boys was fascinated by the mackerel and he kept trying to touch it in the cooler. Every child caught at least one animal whether it was a flopping flounder or a crawling crab! At lunch we got a nice break where we listened to some old school music thanks to Captain Charlie. Although it was a hot day, the energy was through the roof because this was such a new and exciting experience for all of the kids on the trip.


Wednesday and Thursday were interesting days because the schedule was all out order. First of all, the boat left the dock almost 30 minutes late on Wednesday which messed up the next few group sessions. We did not get a group in the morning which meant that we took a little staff adventure up to the abandoned fort on the island. As we wandered around the calcium covered halls of the fort we discussed new ways to engage the kids in ways other than fishing and crabbing. When it was time to get back to fishing there was a serious surprise in the crab traps. WE CAUGHT THREE LOBSTERS. Not one, not two but THREE lobsters. Unfortunately, they were too small to keep but it was awesome to be able to show the kids something different for a change. We put the rubber bands on their claws so that the kids could easily pick them up.


Friday was by far the best day of the week not only because it was the end of the week but because I got to go to the Mini Beach Bash and Splash at Carson Beach in South Boston. To help set up for the hundreds of kids that would be showing up at 10 am, Briana and I were tasked with blowing up a giant beach ball. The first and hardest step was to find an outlet that worked and when we finally found one it took 40 minutes to fully blow up. We weren’t sure if it was going to fit out of the door because it was 12 feet tall! By the time we finished with that all of the kids had shown up and I went to the fishing group where we caught tons of crabs. Although we already had about 20 crabs in a bucket for the kids, each new crab was just as exciting as the one before. I would say that fishing was the busiest activity of the day because we had a steady flow of kids for the entire event. We got a delicious lunch of hot dogs, veggie sticks and baby carrots and the day flew by! This was only the second week of work at Save the Harbor and it was already so packed with excitement which means that the rest of the summer will be even better!
Talk to you all next week!
-Maeve Fittz 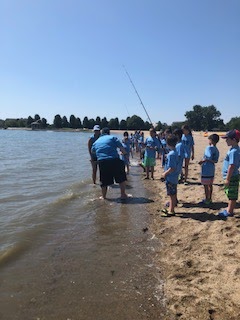 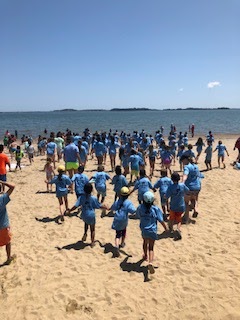 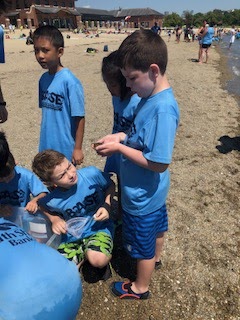 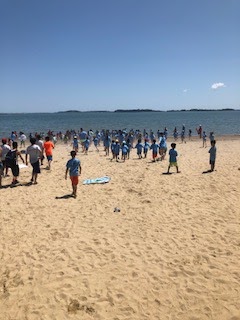