Better late than never: my team landed on calling themselves the "Lob Mob" which was especially fitting for this week! We were in Quincy for this week but we also got to travel to East Boston (giving a little preview for our following week) to learn about beach profiling and mapping from some UMass grad students alongside Jason's group! They had two methods of mapping, one device was extremely expensive but definitely makes it a quick and painless endeavor versus manual mapping labor. It really highlighted so much of what we were learning already in regards to sea level rising. Plus, it was fun to hang out and mingle with another group. The rain kept us in for one day but Friday was especially fun! We FINALLY got to work with some kiddos!! I was really excited.

We were in Dorchester at Malibu Beach and although the beach water itself wasn't exactly lovely, the day was hot and full of fun activities. There were even performances by a entertainment group I think circus-related although I wasn't too sure. There was free Italian ice, plenty of games, a really yummy Caribbean food trunk and the best part: the touch tank! Our table had a touch tank where kids could pet a lobster and crab. I really bonded with the lobster personally. A lot of the kids had never seen one up close before so it was great to see them get excited about that! I even learned how to tell the sex of the lobster. You have to look at the tail width. The males have narrow tails and the females have wider ones. We had a female lobster! The Lob Mob did a great job being helpful with the kids and teaching them about the crabs and lobster. Ty ended up taking them hope...probably to eat. It was sad to see the lobster friend go! 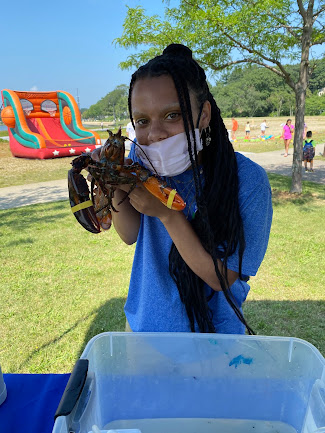 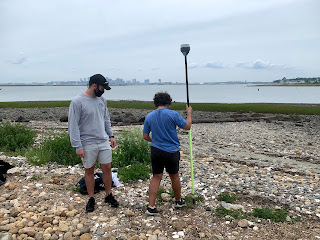