Our Explorations So Far!

Hey There!
It's Jason, back with a mid summer check in to fill you all in on the all of the adventures my team and I have had so far! Time really does fly when you're having fun, it's hard to believe it's already August! Since the beginning of the summer, the Harborbots (Aleena, Jasmine, Ari, McRae, Kurtley, Alex, Albert, and Henry) have been on a roll. From Revere to Quincy to the Harbor Islands, we have really covered some ground! For me personally, this is my first time really exploring the ends of the different T lines, and relying on public transportation has caused me to reflect on accessibility to the outdoors in Boston. I've been encouraging my team to explore the social determinants that affect people's health and wellbeing, and the Boston Harbor is a perfect place to learn about these topics. For instance, we utilized observations from the Seaport district to discuss gentrification and its disproportionate impact on BIPOC populations, and created a tik tok that would allow younger students to learn about gentrification. In South Boston, we created an infographic based on our research and field data explaining accessibility at sites such as Castle Island and The Lawn on D. Our speaker series on Mondays has also led to some great discussions about social issues, and I've been glad to have those conversations carry on at our sites during the week. 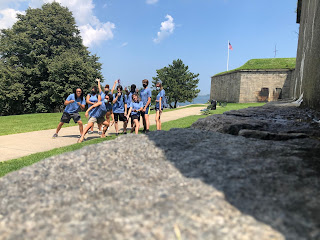 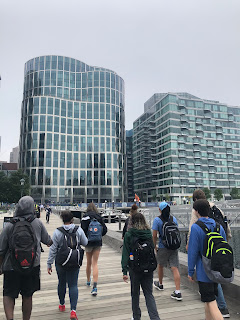 The team exploring the Castle Island and the Seaport
We've also been able to learn so much about the species that live in and around the harbor, and examine how changing temperatures and sea level will affect both wildlife and humans. We were able to learn about bivalves and biodiversity at Revere Beach, invasive species around the harbor, and the unique animals of Bell Isle Marsh in Eastie. We dedicated multiple deliverables to introducing kids to local species and pointing out how they are in danger due to human actions. Issues like sea level rise, habitat destruction, and pollution are caused by humans and have detrimental consequences for people and ecosystems. We paired information about local species with interactive activities to keep students engaged.  So far this summer, our group has found new species that we didn't know about before this summer, giving us a new appreciation for the plants and animals who also call Boston home! 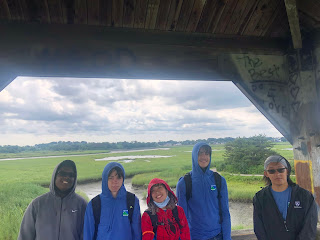 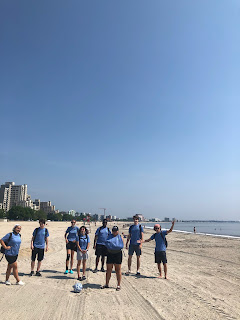 Species searching at Belle Isle Marsh and Revere Beach
My group continues to impress me with their energy, creativity, and leadership! It has been a blast being their leader so far, and I can't wait to see what we'll do before the summer is over :)
See you next time!
-Jason
at 7:21 PM