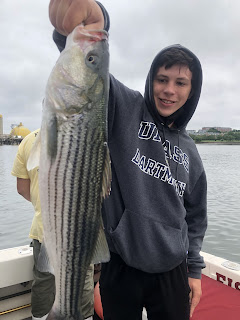 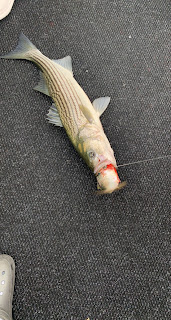 Hey all, Aidan has returned from whence he came with the second to last blog this summer. This week was BUSY, starting with a fishing derby! Wednesday had me at constitution beach, and Friday was another beach bash, so let’s get into it.

I was not happy that I had to get up at 5:30 to fish, but I would survive, especially if I knew what was in the briny depths of the harbor. We met at docks near the ICA building in the morning to get on our boats and I got this fisherman named Bradley and his dad. We got to go to a place they call a secret spot, where there were lots of stripers in the water. I was the first one to catch one, a small one, but enough o make things interesting so quickly in the morning. Later in the day, I caught another striper that was just an inch off of being dinner. Now while they didn’t contribute towards quantity of fish caught in the competition, it was a cool experience to catch pogies, a small type of filter feeding school fish.

On Wednesday, we got to go in late, around noon, to go into work. I was stationed at constitution beach with my team until 4, when a small cruise boat would scoop up a few SHSB teams. We spent most our time in the shade, so much so that I only swam for a few minutes, because it was also cold. The boat had a lot of pizza and a scavenger hunt prepared for us and other organizations in Boston that are managed by teens our age.

Thursday was called off due to the seething heat, but at 6:00 I went into Revere with my siblings to work a touch tank at the sidewalk next to Revere beach.

On Friday, I got to do another beach bash, in Carson too! It was just like a normal summer, with dozens of kids playing with all the gear we brought and visiting the tents we had up. We even got the fishing rods out again, and plenty of people wanted to try. And it ended like the others too, with a giant splash of everyone running into the water.

And that does seem to wrap up this blog, just one more left! We’ll see what’s in store for the final week of the season, but for now, I’ll be signing off.