I spent this week by (and on) the ocean. My group started the week doing the fishing derby. Some of my group ended up on different boats but half of us ended up on the same boat. Unfortunately, none of us ended up catching anything large enough to keep but I did catch 2 fish, which I've never been able to do before. The next day my group went to East Boston and hung out at Constitution Beach. There I played a very short game of volleyball before moving under the shade because of the heat. This entire week was very hot and sunny, which I did not enjoy. We were not at the beach for long however because we needed to go all the way to the harbor for a youth cruise. 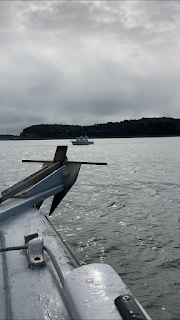 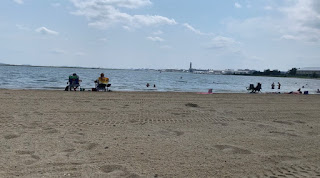 While at Constitution Beach I started to wonder a bit about the airport across the water from us and its possible effect on the sea life (fish). This was mostly in response to the fact we had been fishing the day before and I took home a piece of fish to have for dinner. Does pollution from the airport mean that the fish in that area of East Boston is possibly contaminated? Per usual, I took to Google to see what I could find. One article was about how communities near the airport are exposed to harmful air pollution. A couple studies found evidence of ultrafine particles in the air around airports, which although they are not fully studied (or even regulated by the EPA) could possibly be more harmful than the larger particles (which are regulated). Does that translate over to fish too? Because if the ultrafine particles are in the air, which dissolves in water, and fish breath oxygen... they too are breathing in the particles, right?

I don't think any of the pollution in water is as bad as it used to be but I do think it's something to think about. Overall this week brought up a lot of questions for me and was very entertaining. I hope next week is fun too.