To say the least, East Boston wasn't what we expected probably! This week was a little unusual, but mostly due to circumstances outside of our control. Tuesday was an EARLY morning! We had the fishing derby that day. Let me just say, I felt better knowing I was on the "chill" boat because I don't know how I would've survived those waves. My stomach cannot deal. This boat though ended being super fun. Dee from Caroline's group graced us with her deejaying skills (can that be a pun??). The music really elevated the group's status from fishermen to DANCING fishermen. Not all of us had moves to serve but it was fun once the hesitant ones got into it. No one could ignore the beat!! I was really proud of my group because 4/7 caught a fish! Aiden and Danny caught some BIG ones too, it was pretty amazing. By the end of the day, I think we were all delirious from the water wave nausea and early morning call time. I felt honored to take home some freshly filleted fish, it ended up tasting pretty good too.

Wednesday was also a different scheduled day too. We went to Constitution Beach and I enjoyed some sun and water. Some of the kids played some volleyball and others got heated not just by the sun but also from some intense Crazy 8 matches that I was a part of. I STILL RESENT THE LIKE +20 CARDS I GOT (I'm looking at you Ty, Jay, and Hope). We had the Youth Cruise later that evening so our day was shorter than usual. I think the heat definitely got to us by the end of the day. It was nice interacting with the other groups working to help the environment and seeing the work that they have been doing this summer.

Thursday and Friday were also unusual but the heat advisory changed our plans. Meeting at the library was cool because we got to mingle with the other groups! The library had blasting A/C while outside it was like 97 degrees. By the end of the day I felt like my flesh was melting. Friday also was hot hot hot. I didn't even realize Boston got this hot! Ironically our focus was on the heat resilience study that the city of Boston is working on. We looked at the plan and learned SO much about what methods and solutions are being taken to really provide cooling to the city's more vulnerable areas. I had no idea there were some cooling centers/spots around the area so I was excited to find out. I will definitely be advocating for more of that, especially those of us who do not have A/C!

Staying cool until next week--our final week )-: It's been quite a summer!! 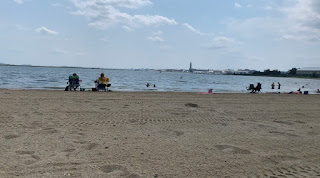 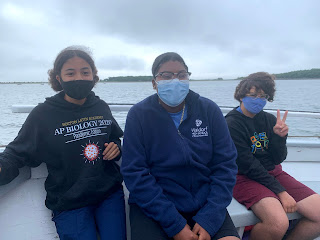