Week 5: A Day in the Life of a Beach Profiler

This week was another fun one with my group. The most interesting thing I’ve learned this week was about a marsh/beach in Winthrop and about beach profiling. On Wednesday we went to a beach where our day was spent with beach profiling professionals and they taught us about all the things we need to know about how to collect data on the beach and how to set up a beach profile. There were two main ways that we were taught this. The first was a more difficult, team oriented, by-the-book way of just taking measurements and observing the amount of elevation that the seafloor has. It also measures how the beach as a whole is changing and reacting to things like erosion. There are 3-4 people that are needed for this method as one person is holding a stick with measurements on it to give a baseline elevation of the group they are standing on at eye level. The second person is holding a separate stick at a six foot gap from the first person and lines up the stick with the first person’s line of sight. The third person is a recorder that jots down the distance the first person sees that will be needed for a comparison later. And the fourth person is just there for supervision. This method, albeit more time consuming, and a lot more room for error, is a lot more thorough when done correctly in terms of correct and accurate data.

The second method isn’t that much more difficult since it requires one person, a long pole, and an app. In short, you take the large stick, level it with the ground below you, and click a button on the app that saves your point to a website that can compare all the data later. You take 3-4 steps, and repeat the process across a straight line. This method is a lot simpler and by the book if you want to be modern. The only downside is the technology you are using can be inaccurate at times if you aren’t careful. Plus that stick I mentioned earlier costs a lot of money. A whopping 25 grand and not very replaceable if you don’t have the cash to. But in any case, I like the first method a lot more since if you have a good team, it can be a fun experience to do each time you are asked to beach profile.And if you have a good team to do this with, then there shouldn’t be that many errors that you guys will make.

Something else I found interesting during this beach profiling day was how yellow it was around the marshy/beachy area close to the water. One of the leaders told me that all the yellow stuff was just a bunch of barnacles that latch themselves onto rocks and just sit in the intertidal zone. The intertidal zone being an in between area that is underwater during high tide, and exposed to the air during low tide. It really shocked me how many barnacles there were and how much space all of them covered. After doing research, I learned that barnacles are just trying to feed off of the plankton on rocks and end up cleaning the water at the same time. Whenever they are threatened, or whenever they feel like it, they secrete a sticky, adhesive like substance that allows them to stick onto surfaces and might not even be able to come off. If they die on that surface, they are stuck there until they are pulled off by some unknown force. Which would probably explain why the marsh area was so yellow. All the barnacles must’ve died and built up in that area without any interference.

also we found a hermit crab 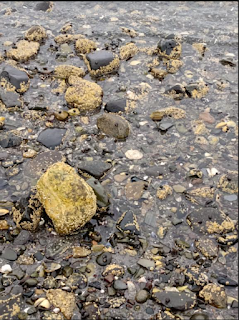