This week our time was split into two main events. The fishing derby on Tuesday and our Charles River site exploration for the rest of the week. The fishing derby was pretty eventful as we spent a few hours on a boat observing the captain and the fisherman working hand in hand driving around the harbor and catching fishes. We were split into groups and in my group was Danny, Harry, and Syan. Everyone was able to catch a fish and towards the very end of our time in the derby, Danny caught a pretty big fish that was at least 31 inches long and was in the running for the biggest fish caught in the derby. Unfortunately, I think it was Ruben’s group or Aidan’s group that ended up catching the biggest fish out of the entire staff. It was only a little heartbreaking :(. It was a pretty fun experience since we got to see how experienced the fisherman really was. Like he was baiting, casting, and catching fish using multiple rods it was crazy!

The second half of our week was our actual work on our site at Charles River. It was kinda depressing walking around the esplanade during our hottest week working. But we had a fun time just walking around and talking with each other. Especially during the playground where we spent some time filming and planning out for our deliverable. Even our new member Julian was fitting in with the group pretty well and started joking around with us. You would think that he was a part of our group for the entire summer. Our main hangout spot for Friday was editing and recording together at the library where we helped put the entire deliverable together and ready for submission.

I also slept but we don’t have to worry about that. 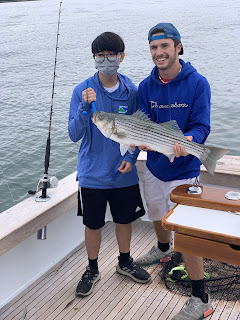