On the day of the fishing derby, we woke up extremely early to meet at Fan Pier where we will get on our boats and hunt for stripers. I was used to waking up super early because whenever I would go fishing with my father, he would always make my brother and I get up super early. At Fan Pier we received breakfast from the staff and got into our groups for the fishing derby. Harry, Syan, and Kurtly were in my group and our captain was named Paul. Together we caught four stripers. After barely just leaving Fan Pier, we caught three stripers that were unfortunately undersized. I wanted to let everyone else have a chance to reel one up because I have caught stripers before. After the first three, the day seemed really slow. Occasionally, my eyes would shut, but eventually I took a one hour nap. The rest of my group did the same because we were all so tired. Out of nowhere, the line from one of the rods started running fast and it was my turn to reel one up. Immediately, I knew it was going to be over 30 inches because of the way it was struggling and how it started jumping out of the water. It took about 3 minutes to reel it up, but it was so satisfying to see the striper caught in the net. Usually, whenever my father and I going fishing for stripers, we go to Nutt Island, but fishing on a boat was a whole new experience for me. My striper turned out to be 32 inches.

This was the first time I fished on a boat and probably is my favorite day at Save the Harbor. I look forward to the next fishing derby! I'm still not sure who won, but I think my fish was at least top 3 or 4. 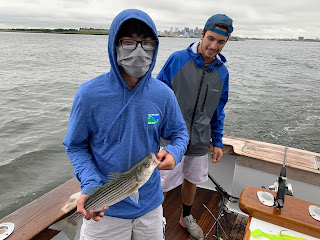 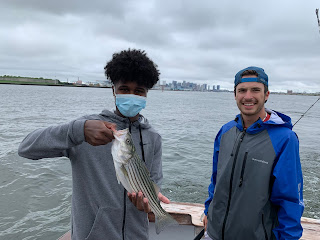 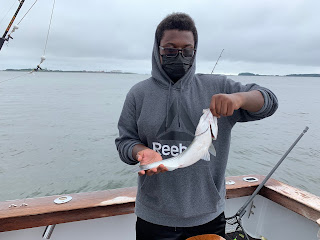