The past few weeks flew by this summer! It's hard to believe that in a few short weeks my team will be starting up at school and I'll be back teaching in the classroom. This summer has been incredibly fast but also highly eventful. In the past few weeks we have visited Winthrop, Revere, Quincy, South Boston, Eastie, and the HarborWalk. Castle island was first opened in 1951, it is mainly known for their famous stand Sullivan's in South Boston and this has been a popular destination for locals and visitors for generations. Castle Island is now the home of bike lanes, a playground, and picnic opportunities but before this it was a military site in 1643. Castle Island is a special location to me, my grandfather and I would visit almost weekly when I was little, sharing a donut at the end of the fishing pier and counting the planes departing and arriving from Logan Airport. I especially loved to watch the fishermen, reeling in their catch of Striped bass, Black sea bass, and Bluefish. This week my group spent some time exploring the area, and today a few members of the group are going to the beach bash at Carson Beach, which you might read more about in their blogs. These past few weeks have been very eventful! We met with Carolina from the MIT SEA grant to learn about Bivalves, Laura from the National Parks Service to learn about the MIMIC program and invasive species in the harbor, as well as a group from UMASS Boston at Coughlin Park in Winthrop to learn about beach profiling. Each different experiment gave each of our group members a new insight as to how various environmental factors impact our harbor. The Sea Grant targets many of the problems that we’ve been learning about throughout the summer: sea level rise, noise pollution, ocean acidification, and coastal erosion. They do case studies and write outreach proposals for the state of Massachusetts to improve the health of coastal ecosystems -- similar to the marshes that we’ve visited this year -- and to help facilitate sustainable fishing, they promote specific gear and community fisheries. At Coughlin Park in Winthrop we learned about beach profiling. We used manual and automatic methods to track the effects of erosion on the beach. Our group prefered to use the GPS (automatic) method, it was accurate to the centimeter, so we felt much more comfortable using this method. The manual method required more team effort, and it was more challenging to learn but once we got the hang of it we were able to take accurate measurements. On the harbor walk, we met with a Park Ranger named Laura and the MIT intern Yosef to learn about tunicates and algae. This was my favorite of all three experiments. We also used the underwater drones to take a look at what lies under the docks at Rowes Wharf. We saw Sea Vase Tunicates, which look like ghosts when we used the drones but they were so beautiful! Finally, this week was my first ever Fish Derby! My team was on the Belle and we caught a few Black Bass. I didn't catch anything big but I did take a pictrue with a striper and I brought some fish home for my family to fry up! 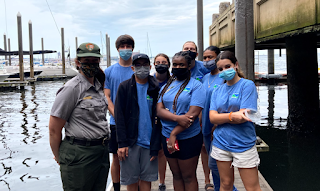 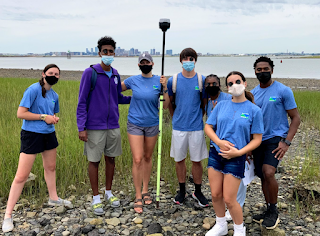 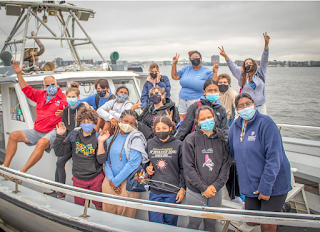 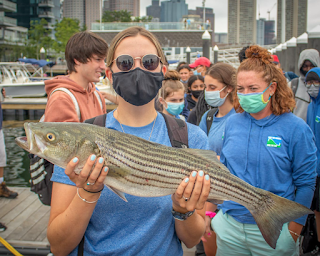