Striper? I hardly know her!

Though the heat wave put a damper on Team Jason's second-to-last week together, we were still able to have a great time at the fishing derby and on the Charles River, which I was particularly happy to be exploring, on account of how close it is to my home. Before hitting the Charles in 90° heat though, each of us took to separate boats during the fishing derby, in search of striped bass.
I was fortunate enough to catch a few stripers, one of which I kept, but some of my group-mates were not so lucky. Surprisingly thought, the most valuable thing I gained from the trip was not the massive fillets that I took home, but instead the interesting striper and fishing facts I learned from Captain Mike and Charlie.
Here's a few:
- Stripers lack eyelids and dive deeper into the ocean when the sun is out, which is why it was advantageous for us to fish on an overcast day
- Female stripers with eggs are significantly larger than males, which is why we weren't supposed to keep any fish longer than 36''.
- Stripers store mercury and volatile "fishy-smelling" chemicals in their fat and blood vessels, which is why we cut away the striper's red meat when it came time to clean up the fillets.
By the time we were exploring the Charles River, the city's heat wave was in full-effect, which made it especially helpful that our group was full of locals that knew all the important areas and spots around the river. Though we tried to avoid spending too much time outside due to the heat, the time that we did spend outside was full of action. I was already familiar with the various parks, outdoor gyms, and playgrounds along the Charles, but I was pleasantly surprised to learn more about the ongoing conservation efforts on the charles, such as the construction of a floating wetland in the middle of the river, designed to suck up nutrients from rainwater runoff, which serves to mitigate the river's yearly toxic algae blooms that make the river unswimmable.
The rest of our time was spent in various cafes, libraries, and on a youth cruise around the Boston Harbor. And while our youth cruise with with various other harbor-related youth organizations was short-lived, we enjoyed our sweet time inside of the air-conditioned Teen Room of the Copley Library. While our time inside of the library meant that we'd have less time on the river, it allowed us to spend more time and effort on our deliverable, and we were able to put out an informative and fun video about the activities along the Charles River, and I don't think anyone would say that our time in the library was wasted.
Good week! One left to go! 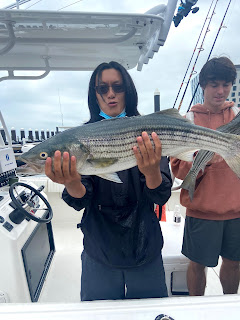 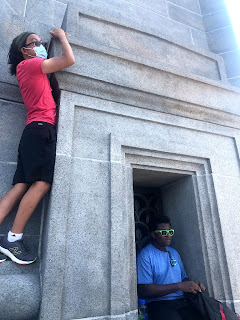